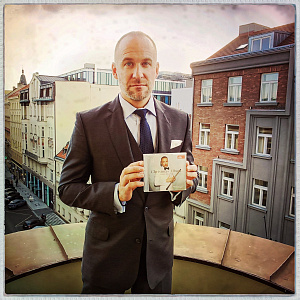 ABOUT HIS CHRISTMAS ALBUM

Christmas and its singular atmosphere have inspired numerous musicians and composers over the centuries. Following several “standard” albums and the crossover project Next Horizon, the renowned Czech oboist Vilém Veverka too has succumbed to the irresistible Yuletide charm and decided to present “his Christmas”. We talked with Vilém prior to the mid-November release of his Christmas Album on Supraphon.

This year you have come up with a special Christmas project. Albums of this ilk have been made by a number of musicians, including the violinists Joshua Bell and Pavel Šporcl, as well as many opera stars, but it would seem you are the very first solo oboist to craft such a project.

Well, I have checked out some Christmas albums made by classical music performers. When it comes to a Christmas “oboe” album, Albrecht Mayer, my dear colleague from the Berliner Philharmoniker, is the only other musician in the world to have recorded one. As far as I am aware, my album is actually the very first of this kind of Czech provenance.

What can the listener look forward to?

Ultimate W Band and I have made a recording in line with tradition, while also attempting to present a new approach to capturing the festive Christmas atmosphere. The album’s leitmotif is Antonio Vivaldi’s L'inverno, performed on the oboe for the very first time.

How did you proceed when selecting the music for your album?

It was a process entailing seeking, trial and error, mastering and, finally, very intense preparations as regards logistics and music alike. When it comes to the selection of the repertoire – perhaps somewhat surprisingly – making a Christmas album is a great challenge. Where to start, how to avoid being superficial or kowtowing, what new to present and where to end? In this respect, I received invaluable help from the composer Martin Hybler, who has arranged most of the pieces.

Your album features a special guest, the soprano Patricia Janečková. Why did you invite her in particular?

Patricia Janečková and I got together a year ago, thanks to Vojtěch Stříteský, director of the Smetana Litomyšl festival. Patricia then appeared as a guest of mine at the “No Limits” concert in Prague. On the basis of my experience, I was certain that she, a singer possessing a great sense of music and brilliant soprano, would be an ideal guest on my Christmas album.

Besides classical music, your new album contains carols, including one of Ukrainian origin – how did you come across the song?

Martin Hybler suggested that Shchedryk be put on the album. He knew the song, as he had learned and performed it as a conductor. As regards the other carols, they were a given – I knew well why I wanted to record them.

What music do you listen to at Christmas?

Mostly Baroque, including Johann Sebastian Bach, a piece by whom can be found on my Christmas album.