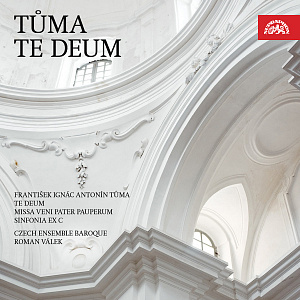 The renowned Czech Ensemble Baroque continue to map František Ignác Antonín Tůma’s music. On 11 November 2022, Supraphon will release their new album, containing works dating from three different phases of the Czech Baroque composer’s life: the grandiose Missa Veni Pater Pauperum, the festive Te Deum, and Sinfonia ex C, conceived towards the end of his days. The album will be available on CD and in digital formats.

Czech Ensemble Baroque’s first recording dedicated to the remarkable Czech-born Austrian composer František Ignác Antonín Tůma (1704–1774) confirmed his position among Europe’s major late-Baroque musical figures. The three pieces featured on the present Supraphon album capture Tůma’s artistic development. The grandiose Missa Veni Pater pauperum, written in 1736 for the Schottenstift, a Benedictine abbey in Vienna, dates from the time when he served Count Franz Ferdinand Kinsky. The festive 1745 Te Deum, scored for a similarly extensive ensemble, was composed for the Stift Wilhering, a Cistercian monastery in Upper Austria, which performed it on multiple occasions within the celebrations of the Feast of Corpus Christi. As regards the Sinfonia ex C, Tůma most likely created it towards the end of his days, when he lived in seclusion at the Premonstratensian monastery in Geras, Lower Austria.

Roman Válek, Czech Ensemble Baroque’s artistic director and conductor, said: “Recording church music always entails tackling numerous questions. Where to place the singers and the instrumentalists? How to make a stereo recording in a real space, divided into the concerto group and the ripieni? How to determine the register of a piece that originally reckoned with the sound of a large organ? Sorting out such aspects involves trials and experiments, with the desired objective being to attain as perfect a sound as possible. I was delighted to find out that almost three centuries on Tůma’s music works a treat, overwhelming both the performers and the listeners with singular Baroque beauty and powerful energy.”

The three festive pieces, recorded for the very first time, attest to Tůma’s being a composer richly deserving of special attention. “I believe that our album will convince the listeners that Tůma was an exceptional composer who rounded off and cultivated the late-Baroque sacred style, and served as an inspiration for the great music creators of the incipient Viennese Classicism,” Roman Válek added.