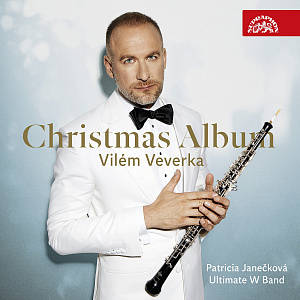 Vilém Veverka is said to have three faces: he is a brilliant oboist, a relentless mountaineer and a dexterous art photographer. Of late, he has drawn attention with his crossover music projects Next Horizon and Reflection. Vilém Veverka has decided to mark this year’s Yuletide with his first Christmas album, featuring renowned carols, as well as classical music, whose magic evokes a truly festive atmosphere. The Christmas Album will be released by Supraphon on 11 November 2022 for international distribution on CD and in digital formats.

“On a global scale, the only other Christmas ‘oboe’ album has been made by Albrecht Mayer, my dear colleague from the Berliner Philharmoniker. As far as I am aware, my album is actually the very first of this kind of Czech provenance,” said Veverka, adding: “Ultimate W Band and I have made a recording in line with tradition, while also attempting to present a new approach to capturing the festive Christmas atmosphere. The album’s leitmotif, as well as narrative, is Antonio Vivaldi’s L'inverno, performed on the oboe for the very first time.”

In addition to pieces by Vivaldi and other Baroque masters (Bach, Handel), it includes a musical account of Argentinean tango-flavoured winter (Ástor Piazzolla), as well as the songs Stille Nacht, Adeste fideles and Chtíc, aby spal (Wanting Him to Sleep), without which one would be hard pressed to imagine Christmas.

“It was a process entailing seeking, trial and error, mastering and, finally, very intense preparations as regards logistics and music alike. When it comes to the selection of the repertoire – perhaps somewhat surprisingly – making a Christmas album is a great challenge. Where to start, how to avoid being superficial or kowtowing, what new to present and where to end? In this respect, I received invaluable help from the composer Martin Hybler, who has arranged most of the pieces,” Veverka pointed out.

The album is adorned by Patricia Janečková’s gracious voice, and it features two very special guests, the harpist Kateřina Englichová and the soprano Adéla Řehořová. Owing to its encompassing a wide range of genres and neoclassical arrangement, the album will undoubtedly delight not only virtuoso oboe lovers, but also many other listeners. The distinguished oboist will launch the album within the Advent concert on 8 December 2022 at the New Town Hall in Prague.