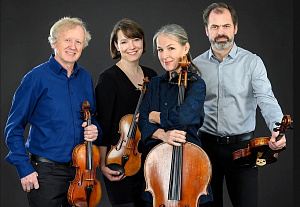 JITKA VLAŠÁNKOVÁ FROM THE MARTINŮ QUARTET

ABOUT REDISCOVERED MUSIC BY JOSEF BENEŠ

Two weeks ago, Supraphon released The Complete String Quartets by Josef Beneš (1795–1873), a lesser known Czech composer, virtuoso violinist and distinguished teacher, who lived in Vienna and Ljubljana, held prestigious posts and gave concerts across Europe. The Martinů Quartet, who have rediscovered a number of overlooked works of music (Sergey Taneyev, Petr Eben), are evidently the first to perform the quartets, which definitely do not deserve to fall into oblivion. Prior to the release of Josef Beneš’s complete string quartets, we talked with the Martinů Quartet cellist Jitka Vlašánková.

How did this remarkable project come about?

I think that even seemingly hopeless situations can bring along something positive, a case in point being the Covid lockdown. All of a sudden, there was scope to pursue activities I had not found time for previously otherwise. So I re-established contact with a family friend, the violinist František Jaroš, who, decades ago, prepared me for conservatory exams and also taught me French. I asked him whether he could give me French lessons online. Jaroš hails from the village in which Josef Beneš was born, and for some time had intensively explored Beneš’s legacy – as a researcher and performer alike. I myself began taking an interest in Beneš’s string quartets, ultimately arriving at the conclusion that it is high-quality music that deserves due attention. At the first possible opportunity, the Martinů Quartet got together at a rehearsal and played the bulk of the scores. We agreed that the music possessed a great potential and decided to bring it back to life – to perform, as well as to record it. Subsequently, we proceeded in the usual way – learned the pieces, played them at several concerts, went into the recording studio and put the finishing touches to the album in formal and visual terms.

How difficult is Beneš’s music to perform?

A brilliant violinist of Europe-wide stature, Beneš composed the majority of his pieces for violin accompanied by piano or orchestra, often requiring virtuosity. Accordingly, his string quartets too are quite technically challenging, the first violin parts in particular. Hence, we decided to spread out our forces and, so that the first violinist wouldn’t have to carry the complete burden, divide the first violin parts between our two superb violinists, Adéla and Luboš. Beneš drew inspiration from the music of the Viennese Biedermeier era, as well as Rossini and Paganini. The quality of his compositional craft is attested to by the fact that his works were published by renowned companies in Vienna, one of Europe’s major music centres. When performing the quartets, we didn’t have to “bolster” them, all we needed to do was to employ our musical imagination to the full.

How do you feel about the new album, containing recordings of pieces the Martinů Quartet are evidently the first to perform in 150 years?

I am really happy that we have managed to add another wonderful stone to the still incomplete mosaic of Czech music history. The album is being released just in time to mark next year’s 150th anniversary of Beneš’s death. And I am pleased that František Jaroš’s all-round and indefatigable support for the project has been rewarded by Supraphon recordings. I feel a warm glow when recalling the fabulous collaboration with all those who participated in the present album’s release.