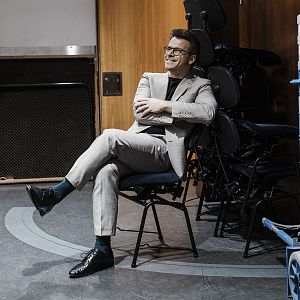 OF THE ROYAL OPERA IN COVENT GARDEN

The Royal Opera House was briefly conducted by the only Czech Rafael Kubelík in the 1950s. Jakub Hrůša will replace Sir Antonio Pappano in the prestigious post at one of the world's most important opera houses, who has accepted the position of chief conductor at the London Symphony Orchestra from the 2024/2025 season after Sir Simon Rattle, who is leaving for the Bavarian Radio Symphony Orchestra. By signing a contract with the Royal Opera House in London and after recent repeated performances with the Berlin and Vienna Philharmonics as well as a highly acclaimed debut at the Salzburg Festival, the best Czech conductor of today, Jakub Hrůša, is becoming the absolute world leader in his field.

After Karl Rankl, Rafael Kubelík, Sir Georg Solti, Sir Colin Davis and Bernard Haitink, Jakub Hrůša will be only the seventh music director of the Royal Opera in its post-war history. With Sir Antonio Pappano, the Royal Opera House's longest-serving music director, who will step down from his post at the end of the 2023/2024 season, he will share directorial responsibility for the operation of the opera house until September 2025.