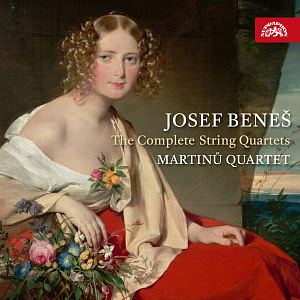 RECORDED BY THE MARTINŮ QUARTET

Josef Beneš (Joseph Benesch, 1795–1873) was primarily referred to in period sources as a virtuoso violinist and distinguished teacher. His final pieces, two string quartets (published in 1865 and 1871, respectively) date from the period when he no longer pursued a career as a soloist, yet all the parts require very dexterous players. Now, 150 years later, the Martinů Quartet, who have rediscovered a number of overlooked works of music (Sergey Taneyev, Petr Eben), are evidently the first to perform the quartets, which definitely do not deserve to fall into oblivion. The album, to be released by Supraphon on 14 October 2022 on CD and in digital formats, will add another wonderful stone to the still incomplete mosaic of Czech music history. It has been made just in time to mark next year’s 150th anniversary of Josef Beneš’s death.

Born in Batelov (Battelau), a village on the borderline between Bohemia and Moravia, from the age of 19 Beneš lived in Vienna and Ljubljana, and gave concerts throughout Europe. During a tour of Italy, he familiarised himself with Niccolò Paganini and Alessandro Rolla. He held prestigious posts (music director of the Philharmonic Society in Ljubljana, professor of the Music Academy in Vienna, first concertmaster of the Hoftheater). Few of his works have survived, with the majority of them being music Beneš wrote for his own solo performances. Beneš drew inspiration from the music of the Viennese Biedermeier era, as well as Rossini and Paganini. The quality of his compositional craft is attested to by the fact that his scores were published by renowned companies in Vienna, one of Europe’s major music centres.

The Martinů Quartet cellist Jitka Vlašánková said: “I think that even seemingly hopeless situations can bring along something positive, a case in point being the Covid lockdown. All of a sudden, there was scope to pursue activities I had not found time for previously otherwise. So I re-established contact with a family friend, the violinist František Jaroš, who, decades ago, prepared me for conservatory exams and also taught me French. I asked him whether he could give me French lessons online. Jaroš hails from the village in which Josef Beneš was born, and for some time had intensively explored Beneš’s legacy – as a researcher and performer alike. I myself began taking an interest in Beneš’s string quartets, ultimately arriving at the conclusion that it is high-quality music that deserves due attention. At the first possible opportunity, the Martinů Quartet got together at a rehearsal and played the bulk of the scores. We agreed that the music possessed a great potential and decided to bring it back to life – to perform, as well as to record it. Subsequently, we proceeded in the usual way – learned the pieces, played them at several concerts, went into the recording studio and put the finishing touches to the album in formal and visual terms.”