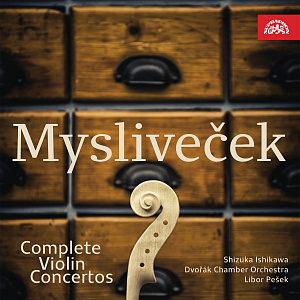 In July 2022, Supraphon re-released the complete set of recordings of Josef Mysliveček’s violin concertos as performed by Shizuka Ishikawa and the Dvořák Chamber Orchestra. The Japanese virtuoso violinist recorded the works between 1983 and 1986 at the Dvořák Hall of the Rudolfinum in Prague under the baton of the legendary Czech conductor Libor Pešek. The album has received a wonderful review by Rob Cowan in the Awards issue of Gramophone magazine.

"The outer movements are gracious and elegant, with lively cadenzas, but it’s the slow movements, or most of them, that hold the attention most consistently. Take the Larghetto from the D major Concerto, the opening tutti filled with pathos, Ishikawa’s first entry quite magical. Try it on a friend as a blind listening test and I’m sure the composer ‘identified’ will be Mozart, maybe even Haydn. A rival recording by Leila Schayegh (Accent 7/18) takes the period instrument route and promotes a slimmer instrumental line but Ishikawa’s beauty of tone, which is captured in extremely realistic mid-1980s sound, marks her version out as superior, certainly as more expressive. So if you fancy sampling what might be described as the finest violin concertos between Vivaldi and Mozart – and I don’t exaggerate – here’s your chance."