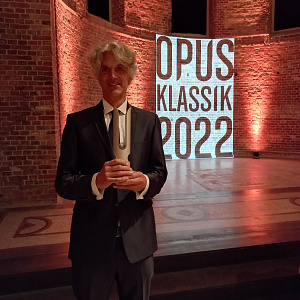 FOR HIS ALBUM THE ART OF ENGLISH HORN!

Dominik Wollenweber, on of the world‘s top cor anglais players, will celebrate 30 years as a member of the Berliner Philharmoniker next spring. In October 2021, Supraphon released his debut album, aptly titled The Art of English Horn. The recording shortly received excellent international reviews as well as the German prestigious OPUS KLASSIK award in the “Istrumentalist of the Year” category, which Dominik Wollenweber collected this Saturday in Berlin.

The first part of the award ceremony with a chambre concert took place on October 8th in the St. Elisabeth Church. A total of 18 OPUS KLASSIK trophies were handed out that evening and some of the awarded artists performed during the concert. Dominik Wollenweber selected Schubert's impressive Impromptu No. 3 in G flat major Op. 90 from his album, which he played with the piano accompaniment of Anna Kirichenko. On Sunday, October 9th, a gala concert was held in Berlin's Konzerthaus, broadcasted the same evening on the German television station ZDF.

The OPUS KLASSIK is the prize for classical music in Germany. The promotion of classical music and in particular the awarding of prizes to its artists is the aim of the Verein zur Förderung der Klassischen Musik e. V., the organizer of the most important German classic prize. This year up to 45 winners in 27 categories are awarded by a specialist jury, whose members are representatives from the music and media industry.