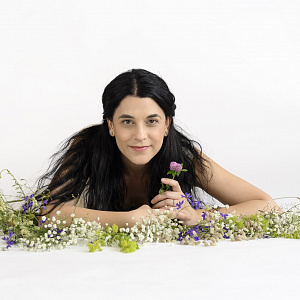 REVEALING THE PREVIOUSLY OVERLOOKED GRACE AND BEAUTY OF 17TH-CENTURY HYMNS

The renowned Czech soprano and harpist Hana Blažíková has a special penchant for early music. Adored by audiences all over the world, the most prestigious festivals in this domain even condition engagement of the ensembles she collaborates with on her participation. Blažíková is capable of evoking a wide range of emotions. Over the past few years, her voice has adorned numerous Supraphon recordings, made with Collegium Marianum, Hipocondria Ensemble, Tiburtina Ensemble, Capella Regia Praha and Schola Gregoriana Pragensis. At the end of September, Supraphon released a new album of hers, featuring Czech Marian Music. It draws the listener into the world of poetic hymns praising the Virgin Mary, which formed a significant proportion of 17th-century Czech music.

The recording juxtaposes pieces by Adam Václav Michna of Otradovice with works by Alessandro Grandi, Vincenzo Albrici, Heinrich Ignaz Franz Biber and Samuel Capricornus, all of them composers who were often in close contact with the Jesuits and drew inspiration from the spirituality practised by the Society of Jesus. Hana Blažíková made the album, titled A Lily Among Thorns, with the acclaimed Collegium Marianum ensemble, headed by Jana Semerádová. We talked with Hana Blažíková about the new album shortly before its release.

What do Adam Václav Michna’s songs mean to you?

I first encountered Adam Michna’s songs at a tender age. Perhaps that is one of the reasons why I have always had an affection for his music, and even feel somewhat sentimental about it today. Back in my childhood, Michna’s songs were often played at home at Christmas and Easter, and I myself used to sing them at a village church accompanied on the organ by my grandma, and also as a little soloist with her choir. Later on, as a primary school pupil, I was singing Michna’s songs with Pavel Jurkovič and Pavla Sovová. When I was in the third grade, Pavla Sovová rehearsed with us the entire Czech Lute, which our class went on to perform at the church in Bechyně. The next time I encountered Michna’s pieces was when, by now an adult, I performed them with ensembles specialised in Baroque music. By and large, Michna’s works have accompanied me throughout my life, and they have been among my favourite repertoire to this day. I must, however, point out that Michna was not just a composer of songs, for which he is known best (and we should not forget that he was a brilliant poet too!), but also of more challenging liturgical pieces for large groups of musicians. He was one of the greatest early-Baroque composers in Bohemia.

Why does the album contain pieces by other composers too?

We primarily chose the works by other composers so as to place Michna in a period context, as well as, in part, with the aim to balance vocal numbers with instrumental music, thus allowing the listener to focus fully for a while on the extraordinary art of the Collegium Marianum members. In this respect, I would like to highlight Biber’s Sonata No. 1 in D minor, “Annuntiatio“, in which the violinist Lenka Torgersen showcases her virtuosity. But all the pieces are beautiful, and without them the recording wouldn’t be as special. What is more, all these composers (with the exception of Grandi, whose hymn is the oldest work on the album) were somehow connected with the Czech lands – Biber and Capricornus were born in Bohemia, while Albrici spent his final years in Prague.

I have performed with Collegium Marianum for longer than with any other ensemble. And I think our collaboration clearly shows it. Jana Semerádová and I understand each other on both a musical and personal level. The programmes of the concerts we give together are tailored to all those involved, and I, as a singer, really cherish our performances. I would term our co-operation as ‘family-like’ – not just because we know each other so well, but also because my husband Jan Krejča, a theorbist, has regularly performed with the ensemble too.