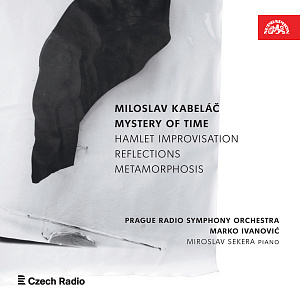 A NEW RECORDING OF MILOSLAV KABELÁČ’S THE MYSTERY OF TIME

SET FOR A SUPRAPHON RELEASE

With his life and work, Miloslav Kabeláč, one of the greatest 20th-century Czech symphonists, foregrounded a highly topical theme: the necessity of not yielding to evil and commitment to humanistic ideals. He displayed both during the Nazi occupation and the time of Communist dictatorship in Czechoslovakia. Kabeláč escaped the ideological grip of the authoritarian regime by looking up to the star-studded sky. In The Mystery of Time, an underestimated gem of 20th-century European music, he expressed his emotional trepidation of and fascination with space, the solid order that governs the cosmos. In collaboration with the Prague Radio Symphony Orchestra and the conductor Marko Ivanović, the album will be released by Supraphon on 23 September 2022, on CD and in digital formats.

The conductor Marko Ivanović said of the new recording: “The Mystery of Time is conceived as a single gigantic dramatic arch, which must be built up in terms of tempo and dynamics. Leaving nothing to chance, Kabeláč furnished the score with numerous data and instructions, thus to a certain degree making the conductor’s work easier. While possessing a great potential to enthral the listener, The Mystery of Time places enormous physical challenges upon the orchestra. Accordingly, when rehearsing the piece, the conductor must also apply psychology, so as to persuade the musicians that the enormous effort they expend on the extensive piece is worthwhile, as it is paid back in the form of the audience’s enthusiastic response.”

Besides The Mystery of Time, the album contains other major Kabeláč works: Hamlet Improvisations for large orchestra, Op. 46 (written to mark the 400th anniversary of William Shakespeare’s birth); Reflections, Op. 49, and Metamorphoses II, Op. 58, which the composer completed just a few weeks before he died. His final work was inspired by the oldest Czech chorale, Hospodine, pomiluj ny (Lord, Have Mercy On Us), symbolically ending with the prayer Kyrie eleison, repeated three times. The Mystery of Time album links up to the acclaimed complete recording of Kabeláč’s symphonies (Supraphon, 2016), thus supplementing the artist’s remarkable discography with further jewels.

“The Prague Radio Symphony Orchestra are absolutely amazing and accommodating, possessing enormous experience with studio recording. What is more, Kabeláč himself worked at Czech Radio in Prague and used to conduct its orchestra. In this light, I feel honoured to have had the opportunity to record his complete orchestral pieces with the Prague Radio Symphony Orchestra in particular,” Ivanović pointed out.