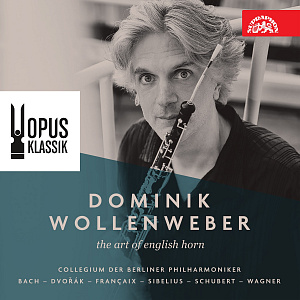 AND HIS ALBUM THE ART OF ENGLISH HORN!

Ranking among the world‘s top cor anglais players, Dominik Wollenweber has been a member of the feted Berliner Philharmoniker for 29 years. In October 2021, Supraphon released his debut album, aptly titled The Art of English Horn. The recording shortly became the Album of the Week of the German radio station rbbKultur and gradually received another excellent international reviews. Dominik Wollenweber has now succeeded in the German prestigious OPUS KLASSIK award in the “Istrumentalist of the Year” category!

The OPUS KLASSIK is the prize for classical music in Germany. The promotion of classical music and in particular the awarding of prizes to its artists is the aim of the Verein zur Förderung der Klassischen Musik e. V., the organizer of the most important German classic prize. This year up to 45 winners in 27 categories are awarded by a specialist jury, whose members are representatives from the music and media industry. The award ceremonies will take place on 8th October in the Elisabeth Church and on 9th October in the Konzerthaus Berlin. The gala concert on 9th October in the Konzerthaus Berlin will be recorded and broadcasted by the ZDF. Dominik Wollenweber commented as follows on having won the coveted accolade: “When I heard about that award in the first moment, I just couldn’t believe it. You know the OPUS KLASSIK is a big and important prize in Germany and even though I’m playing in the Berlin Philharmonic orchestra, one of the best orchestras in the world, I thought with my instrument, which is a rare instrument in the solo literature, I will never be so deeply in interest that I can achieve an award like that. It’s a real honour for me, also in my age, I’m not the youngest anymore. But nevertheless the prize makes me think of a new recording, hopefully again with Supraphon!“

Conducted by Sir Simon Rattle, the Berliner Philharmoniker accompany Dominik Wollenweber in Sibelius’s wonderful tone poem The Swan of Tuonela, while members of the orchestra keep him company throughout the present recording. One would be hard pressed to imagine an album dedicated to the English horn lacking the Largo from Antonín Dvořák’s New World Symphony or the solo from Richard Wagner’s Tristan und Isolde. On the other hand, J. S. Bach’s Concerto in G major and Schubert’s Impromptu No. 3 may come as a surprise, while Jean Françaix’s Quartet is simply bound to lift the listener’s spirit.

A complete list of OPUS KLASSIK 2022 awards winners is HERE.