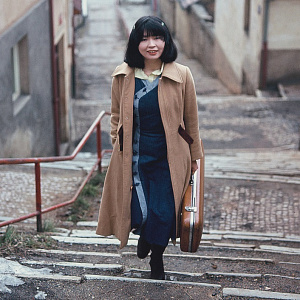 On 29 July 2022, Supraphon will re-release the complete set of recordings of Josef Mysliveček’s violin concertos as performed by Shizuka Ishikawa and the Dvořák Chamber Orchestra. The Japanese virtuoso violinist recorded the works between 1983 and 1986 at the Dvořák Hall of the Rudolfinum in Prague under the baton of the legendary Czech conductor Libor Pešek.

Shizuka Ishikawa moved to Prague from Tokyo after meeting Marie Hlouňová, a Prague Conservatory teacher, with whom she began to study in 1970 following her being granted a scholarship from Czechoslovak Radio. Later on, she received prizes at the Henryk Wieniawski International Violin Competition in Poznan (1972), the Queen Elisabeth International Music Competition in Brussels (1976) and the Fritz Kreisler International Violin Competition in Vienna (1979). At the age of 19 she first performed as a soloist with the Czech Philharmonic, and at the age of 21 she debuted at the Prague Spring festival. Shizuka Ishikawa toured Japan with the Czech Philharmonic. As a soloist of the Tokyo Metropolitan Symphony Orchestra and the Japan Philharmonic Orchestra, she gave concerts in a number of European cities, and appeared at festivals in Warsaw, Budapest and Helsinki. In the late 1970s, she began making recordings for Czech Radio and Supraphon, primarily with the Czech and Brno Philharmonics, Dvořák Chamber Orchestra, Prague Chamber Orchestra, Capella Istropolitana and the Württemberg Philharmonic. Czech music constitutes a significant part of her repertoire. Since 1997, she has been a member of the Kubelík Trio, with whom she has regularly performed worldwide.

We talked to Shizuka Ishikawa before the re-release of the complete set of recordings of Josef Mysliveček’s violin concertos.

How do you recall recording Josef Mysliveček’s music?

I am still very happy that I made the recordings, as I was afforded the opportunity to become acquainted with and thoroughly learn Josef Mysliveček’s violin concertos. Regrettably, they are not part of the staple violin repertoire. And it is a pity that the sheet music has not been published and that the pieces have scarcely been performed at concerts. I still vividly remember the splendid collaboration with František Xaver Thuri, who within a mere few weeks wrote virtuosic cadenzas for all the concertos. Josef Mysliveček’s musical style blends Czech precision and Italian colour with virtuosic elements.

What was it like working with the conductor Libor Pešek?

Working with Maestro Libor Pešek was truly exciting. It was good that prior to the start of the recording I performed under his baton at several concerts, which was always pleasantly thrilling. I can say that thanks to Mysliveček’s music I experienced unforgettable moments teeming with inspiration. And I think that even today, years later, this is palpable in the Supraphon recordings. No wonder then that they are being re-released.

﻿What do you like best about the Czech Republic?

The beautiful nature and, of course, Czech music across the centuries.