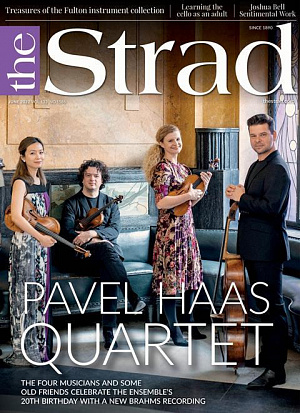 IN THE STRAD AND BBC MUSIC MAGAZINE

Pavel Haas has appeared on a cover of the June issue of The Strad. The ensemble gave the magazine an extensive interview on the occasion of their 20th anniversary, which they celebrate this year.

You can read a beginning of the interview HERE.

At the same time, another large interview has been published in the June issue of the BBC Music Magazine, which has recently ranked the Pavel Haas Quartet among the top 10 string quartets of all time, alongside the Alban Berg Quartet, Amadeus Quartet, Borodin Quartet and other stellar ensembles.

The Pavel Haas Quartet, which has won six Gramophone Awards and two BBC Music Magazine Awards as well as the Diapason d’Or de l’Année, released a new recording on 13 May 2022. Their eagerly anticipated ninth album contains Johannes Brahms’s Piano Quintet in F minor, Op. 34 and his String Quintet No. 2 in G major, Op. 111. As in the case of its album of quintets by Antonín Dvořák, which won the Gramophone Chamber Award, the Pavel Haas Quartet has invited special guests – Boris Giltburg (piano) and Pavel Nikl (viola, former member of the PHQ).