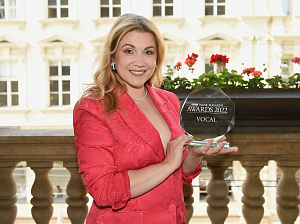 The soprano Kateřina Kněžíková's debut album Phidylé received the BBC Music Magazine Award in the "Vocal" category. Due to her heavy workload, Kateřina was unable to attend the awards ceremony, which took place by the end of April in London.

"Unfortunately, I didn't have time to take over the award sooner, but I finally have it. The production brought it to me for photo sessions of the cover feature to a lifestyle magazine What," says Kněžíková, who is nowadays preparing for the premiere of The Bartered Bride opera at the National Theater. A diary of one of our most sought-after singers is really full. If Kateřina doesn't perform, she has rehearsals or devotes herself to her students. "I have a lot of performances waiting for me until the end of the season. In addition to The Bartered Bride, there are Rusalka and Carmen scheduled. I will make my debut in Italy in June, where I will sing the Glagolitic Mass with one of the best orchestras in the world, the Orchestra dell’Accademia Nazionale di Santa Cecilia in Rome, under the baton of Jakub Hrůša.”

And what is it like holding the world acclaimed award in your hands at last? “The award is beautiful. I'm excited and I'm very happy, of course. Today I feel exceptional at all. The photos for the What magazine are being taken by amazing photographer Lucie Robinson, I'm wearing a beautiful dress with gorgeous jewelry worth 5 million CZK. There is a fantastic team of people around me who make sure that the work is done as well as possible. I feel like I'm in cotton clothes," laughs Kateřina.

The BBC Music Magazine Awards solely pertain to classical music and, unlike the majority of other prestigious accolades, the winners are chosen via public internet polling worldwide. A repertoire of the award-winning album Phidylé is made up of engrossing songs by Bohuslav Martinů, Henri Duparc, Maurice Ravel and Karol Szymanowski. Kateřina Kněžíková recorded the album with the Janáček Philharmonic Ostrava, conducted by Robert Jindra. The album was released by Supraphon in May 2021.