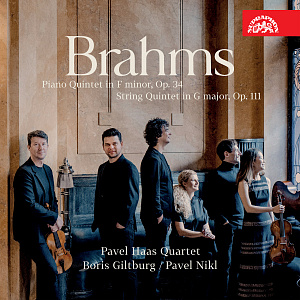 IS RELEASING AN ALBUM OF BRAHMS QUINTETS

Early this year, Britain’s prestigious BBC Music Magazine listed the Pavel Haas Quartet among the ten best string quartets of all time alongside the likes of the Alban Berg Quartet, the Amadeus Quartet, and the Borodin Quartet. The Pavel Haas Quartet, which celebrates its 20th anniversary this year and has won six Gramophone Awards and two BBC Music Magazine Awards as well as the Diapason d’Or de l’Année, is releasing a new recording on the Supraphon label on 13 May 2022. Their eagerly anticipated ninth album contains Johannes Brahms’s Piano Quintet in F minor, Op. 34 and his String Quintet No. 2 in G major, Op. 111. As in the case of its album of quintets by Antonín Dvořák, which won the Gramophone Chamber Award, the Pavel Haas Quartet has invited special guests – Boris Giltburg (piano) and Pavel Nikl (viola, former member of the PHQ).

At 20 years of age, Johannes Brahms was given support by Clara and Robert Schumann. Brahms’s relationship with Clara is apparently also behind the Piano Quintet in F minor, Op. 34. Brahms originally planned the piece as a string quartet, then in the spring of 1864 he reworked it as the Sonata in F minor for two pianos. Clara, however, was not satisfied with the sound of either version; it was only when Brahms combined piano with strings that he achieved the desired contrasts and wealth of colour. At the work’s private premiere, Clara Schumann played the piano part, to which she attributed “symphonic character”. There is also plenty of symphonic character in the new recording of the work by the Pavel Haas Quartet. Johannes Brahms is said to have intended his String Quintet in G major, Op. 111 to be his final composition.

About the new album, Pavel Haas Quartet violinist Marek Zwiebel said: “For us, recording Brahms has been a great joy, but also a great challenge because these are two big works into which Brahms put a part of his life. He composed the first quintet as a young man, we might say at the beginning of his career as a composer, while he wrote the quintet with two violas in the autumn of his life. We, too, have put a great deal of our emotion and energy into it, so we hope people will enjoy the result.” The violinist Veronika Jarůšková, who founded the Pavel Haas Quartet 20 years ago with the violist Pavel Nikl, added: “It’s great to be able to do the work that you love, and if you can do it with friends who like each other – like the way we are friends with Pavel and Boris – that’s the most beautiful thing you can experience. I believe you can tell that from our new album.”

The album of Pavel Haas Quartet, Boris Giltburg and Pavel Nikl playing Johannes Brahms’s quintets, often called the crowning achievement of his chamber music, will be released by SUPRAPHON on Friday, 13 May 2022 on CD and in digital formats.