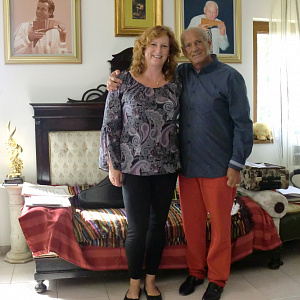 A LIFE DEDICATED TO THE PAN FLUTE

The Pan flute, one of mankind’s oldest instruments, is documented in many cultures of antiquity. It is now known in its perfected form mainly from its use in Romanian folk music. Romania was also the home of the virtuosos who made the instrument famous in late 20th century: Damian Luca, Radu Simion, Nicolae Pîrvu, Simion Stanciu, and Gheorghe Zamfir. Liselotte Rokyta studied under four of the “big five”, and she learned much about authentic Pan flute playing directly from folk musicians in Romania during several trips there. The album Syrinx, which was released on 22 April 2022, demonstrates that the Pan flute undeniably also has a place of its own in the world of classical music. Before the album’s release, we had a conversation with Ms. Liselotte Rokyta.

What led you to the Pan flute?

I grew up in the Netherlands, where the Pan flute was a rather unusual instrument at the time. When I was little, I heard Gheorghe Zamfir play on television, and I was so enchanted by the sound of the Pan flute that I was burning with enthusiasm! I wanted to learn to play it so much, but it took a long time before I could actually get an instrument. Studying the Pan flute at the schools of the arts in Hilversum and then in Amsterdam was a dream come true.

Your new recording demonstrates that the Pan flute undeniably has a place of its own in the world of classical music.

I have been a concert Pan flute player for a long time, but I am still the only professional Pan flute player in the Czech Republic. And the Pan flute has long belonged to Classical music – it is nothing new, although it is still quite an exotic instrument to many people. I mostly play classical and Romanian folk music accompanied by organ, piano, chamber orchestra, or a cimbalom ensemble.

Was it difficult or easy to choose the right pieces for the album Syrinx?

When Covid arrived, the world changed; instead of giving concerts abroad, I was at home, so I suddenly had no reason to play or practise. To avoid losing all my motivation, I began studying solo repertoire for Pan flute. There were enough pieces that I had long wanted to play but hadn’t had the time. Then the opportunity came to record for Czech Radio in Ostrava, and the idea emerged of doing an album for Supraphon as well. To the repertoire for solo Pan flute, I added compositions for Pan flute and piano (with the pianist Eliška Novotná) to make the album more varied.

Will you also be performing the repertoire from the album in concert?

I hope the album Syrinx will convince the organisers of classical music festivals that Pan flute can enhance their programming. There is even something concrete on the horizon for this autumn.

We have seen the photograph of you with Gheorghe Zamfir. What was it like meeting him?

I have met with Gheorghe Zamfir several times over the years. The very first time was at a masterclass in the Netherlands in 1994. In Switzerland in 2010 and 2011 we both taught at a summer masterclass, and he even accompanied me at the piano when we played a special concert that evening. Zamfir is a great musician, and I admire him very much. His entire life is literally dedicated to the Pan flute. I remember how he complimented me when I played his composition Hora Batuta from the album Hora românilor & țiganiada. He listened attentively, then he came up to me and said: “Liselotte, you play like a man; you’re wonderful!"