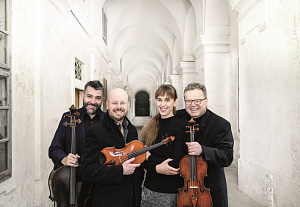 Robert Schumann’s music has always astonished listeners with its range and profundity. The Dvořák Piano Quartet’s new album spans the entire arch of the composer’s work: the beginning, the peak and the end. Just like all other Schumann works, the pieces it contains show how immense beauty is often close to pain and suffering. We talked about the album featuring Robert Schumann’s Piano Quartets Nos. 1 and 2 with the violist Petr Verner.

Why did you opt for Robert Schumann works?

After making our Dvořák album, we mulled our next recording project for a relatively long time. We considered several options. Just as perhaps every ensemble, we desired to focus on the global repertoire pieces we cherish most. On the other hand, we bore in mind that in today’s oversaturated world it would be better to come up with something different, novel. We love discovering and exploring lesser-known or entirely unknown compositions, some of which are included in our long-term plans. And we ultimately decided to record these Robert Schumann pieces, thus taking into account both aspects. Music lovers in general are currently either only vaguely familiar with his Piano Quartet No. 1, or do not know it at all. Schumann wrote it at the age of 18, and it was his very first extensive work. Yet it was not performed during his lifetime and would be lost for many decades. The material has only been available since 2010, more than two centuries after Schumann’s death. There are few recordings of this beautiful, engrossing quartet. It is truly astounding that such a splendid Schumann piece is virtually unknown.

What else does your new album contain?

The album also features Piano Quartet No. 2, Op. 47, a highly popular, frequently performed and recorded masterpiece, as well as the Märchenerzählungen, Op. 132, Schumann’s very last chamber work. The latter has almost exclusively been recorded with the clarinet, while the version with the violin, authorised by Schumann in the manuscript, has perhaps only been recorded once.

Your album spans the entire arch of Schumann’s oeuvre.

We can view it from several angles. Generally speaking, interpretation of every piece develops with exploration and performance. Sometimes it evolves for the better, sometimes you must purge it of certain “stage” deposits and put it back to the better state it was in the past. It is a never-ending process, which is good, since it adds meaning to our work, as well as making us endeavour to seek and improve constantly. A recording captures the moment and does not evolve anywhere. It entails great responsibility. A different philosophy. Mustering up the courage and self-confidence, and finding the motivation to record the momentary interpretation of a work is always rather challenging for musicians. In such situations, we are suddenly similar to painters, who present a finished, final form. Everything else is up to the imagination and state of mind of the person perceiving it.

But that which is difficult may also be viewed differently.

A recording is not just down to the musicians, the result is significantly influenced by the team working on it. You need a brilliant sound engineer using state-of-the-art technology, an emphatic music producer, a superb tuner, inspiring acoustics. In this case, we were really fortunate in this respect, everyone around us was simply amazing. On the other hand, the album was recorded during the Covid pandemic, which made things more complicated in that all those involved had to be healthy at the particular time, so as to be able to get together at once. I must admit that it was difficult to synchronise all these factors and make the process as smooth as possible.

Will the music from the new album be part of your concert repertoire?

Following the long pandemic pause, we were naturally immensely eager to perform before audiences. We have planned many concerts, with the programme primarily including the music from the new album, at home and abroad alike. But the situation has become complicated again. The war raging in Ukraine and its probable consequences will undoubtedly lead to great attenuation of live culture. Reports of cancelled concerts have already been arriving. Inter arma silent leges. For the time being, we are scheduled to present our new album at a concert on 9 June 2022 at the New Town Hall in Prague. A series of concerts should be rounded off with a performance of the two Schumann piano quartets at a Czech Chamber Music Society evening at the Dvořák Hall of the Rudolfinum on 12 December 2022.