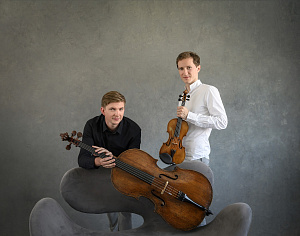 ABOUT THE NEW ALBUM TITLED PATHS

Paths – crossing and diverging, those we choose ourselves and those that are predestined and inevitable: through this prism the violinist Josef Špaček and the cellist Tomáš Jamník view the music by four Czech composers written within a mere 35 years of the 20th century. The album Paths is a statement of the two superlative artists. A virtuoso, profound and engrossing recording. We talked with Tomáš Jamník shortly before the album’s release.

Tomáš, the repertoire you and Josef Špaček selected for the album Paths reflects the 20th-century reality. Why do you find the music intriguing?

First and foremost, we opted for music of Czech provenience, scored for violin and cello. The first line – Bohuslav Martinů – was clear from the very beginning. It encompasses pieces that are generally known and have been performed worldwide, works we ourselves are familiar with. The second line meanders around Leoš Janáček. Both Jewish composers, Gideon Klein and Ervín Schulhoff, had an affinity to Janáček, though each in his own way. We thus decided to have Janáček’s String Quartet No. 1, “Kreutzer Sonata”, arranged for violin and cello specially for this album.

Paths is also your account of today’s world – what would you like to draw the listener’s attention to?

We did not title the album Paths randomly. We were interested in the sources that inspired the composers and found out that they often were places. We compiled a list of all the places Janáček, Klein, Martinů and Schulhoff visited, and made a special map, which is attached to the CD. The listener can thus identify the four artists’ paths. Perhaps our greatest revelation was Gideon Klein, who was murdered by the Nazis at the tender age of 24. Fortunately, we have available a diary in which he recorded in detail the trip to Italy he made before fate turned against him. What the four composers had in common is that, notwithstanding the misfortune that afflicted their lives, they imbued their music with a bit of optimism too.

What was the most difficult aspect when recording the album?

The recording took place at the Niměřice chateau, whose owners are great culture enthusiasts. We were grateful for the absolute quiet there. We explored thoroughly every one of the pieces whose manuscripts we had available. Oddly enough, the most time-consuming work was with the piece that has been performed most frequently of the five included on the album – Bohuslav Martinů’s first duo. Its one and only existing edition contains a great quantity of errors, such as absent dynamics in the cello and absent bars in the cadenza. Our aim was to give the listener the opportunity to hear the piece precisely as Martinů intended it to sound.

Do you intend to perform Paths in concert?

We love giving concerts, and we look forward to presenting the repertoire at a number of venues. We have received invitations, including to Bozar in Brussels. And we will also perform in small, intimate milieus. One such is Villa Winternitz in Prague, where we are scheduled to present the album’s repertoire on 15 June 2022.