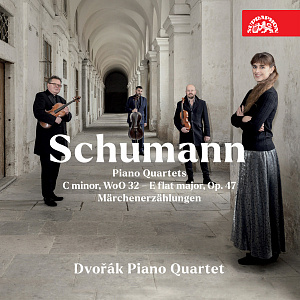 THE DVOŘÁK PIANO QUARTET IS RELEASING A NOTEWORTHY ALBUM

WITH FAMILIAR AND UNFAMILIAR WORKS BY ROBERT SCHUMANN

“Robert Schumann enabled us to record an album that includes a curiosity as well as familiar compositions. So far, audiences have only a very vague idea of his first piano quartet if they know about it at all. He wrote the piece at the age of 18, and it was his first more extensive work in multiple movements. It was not performed, however, and was lost for ages. The material has only been available since 2010. This is beautiful, interesting music, and there are not many recordings. It’s absolutely incredible to have unknown and yet wonderful music by Schumann”, says the violist Petr Verner of the Dvořák Piano Quartet about the content of the new album.

Schumann’s Piano Quartet in E flat major, Op. 47 bears witness to the mastery as a composer who has been nurtured in Bach and Beethoven, but who is speaking in his own inimitable language. Schumann’s Märchenerzählungen (Fairy Tale Narrations, 1853) was one of his last works written shortly before his failed attempt to end his unbearable psychological suffering by jumping into the Rhine.

Petr Verner adds: “To the album, we have added Schumann’s very last chamber work. The Märchenerzählungen, Op. 132 have always been recorded in the version with clarinet. Schumann’s manuscript contains an authorised version with violin, which does not appear elsewhere on recordings with perhaps a single exception.”

The Dvořák Piano Quartet has plans for many concerts at home and abroad, mostly with the repertoire of their new album. About their plans, they told us: “The situation has become very complicated now. The war that has erupted in Ukraine and its consequences will lead to a great suppression of live cultural events. Already now there are reports of concerts being cancelled. For now, the plan is for the launch of the new album at a concert on 9 June 2022 in Prague at the New Town Hall. The highpoint of a series of performances is to be a performance of both of Schumann’s two piano quartets at a concert of the Czech Chamber Music Society at the Rudolfinum’s Dvořák Hall on 12 December 2022.”