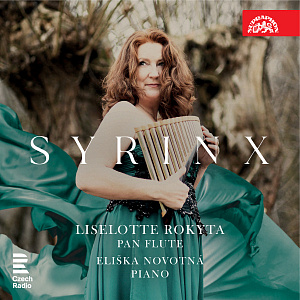 ONE OF THE MOST FAMOUS PAN FLUTE PLAYERS LISELOTTE ROKYTA

IS ISSUING THE ALBUM SYRINX

Liselotte Rokyta and pianist Eliška Novotná mostly recorded music by French composers on their new album along with Romanian Dances by Béla Bartók. The recording, to be issued by Supraphon on 22 April 2022 with the title Syrinx, shows that the Pan flute has a rightful place in the classical music world.

The Pan flute is one of mankind’s most ancient instruments, and it is documented in many cultures of antiquity. In its perfected form, we know it today mainly from its use in Romanian folk music. Romania was also the home of the virtuosos who made the instrument famous in the latter half of the 20th century: Damian Luca, Radu Simion, Nicolae Pîrvu, Simion Stanciu, and Gheorghe Zamfir. Liselotte Rokyta, who grew up in the Netherlands, studied under four of the “big five”, and she learned much about authentic Pan flute playing directly from folk musicians in Romania during several trips there. She has even been a friend of Gheorghe Zamfir for many years, and like him, she too decided to devote her artistic career to the Pan flute. Today, Liselotte herself teaches the first official Pan flute course in the Czech Republic.

On her new album, there are also arrangements of Romanian folk dances by Bartók and Porumbescu. Debussy wrote Syrinx for transverse flute, but the Pan flute, to which the work’s title refers, offers a variant that is of equal value at the least. Other arrangements Rokyta has chosen for the album are based on music by French composers of the 19th and 20th centuries for flute and in some cases piano or organ. Perhaps you cannot imagine Varése, Honegger, or Messiaen on the Pan flute. You will hear for yourself that with Liselotte Rokyta, the attempt is definitely worthwhile. The composers in question would undoubtedly have written for Pan flute if they had been close to a musician with her qualities.

﻿“I hope the album Syrinx will convince the organisers of classical music festivals that Pan flute can enhance their programming”, says Liselotte Rokyta about the release of her new album.