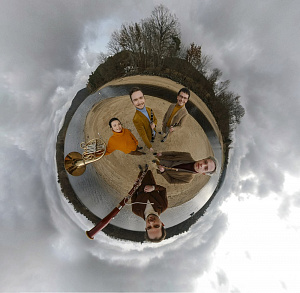 FROM CZECH MUSIC TO THE GLOBAL 20TH-CENTURY QUINTET REPERTOIRE

The Belfiato Quintet members are known for sharing identical views, zest and enthusiasm for the music they perform. This year the ensemble are celebrating their 17th anniversary, which they mark with a new album. The works featured on Elements are staples of their repertoire and, above all, close to their hearts. The recording is the first on which the Belfiato Quintet present global music. We talked about the Belfiato Quintet’s new album, their third, with the flautist Oto Reiprich.

Why is Elements important for your ensemble?

We primarily deem it important with regard to the selected repertoire. Our first album captures our accounts of works by the Czech composers Haas, Foerster and Janáček, while the second pays tribute to Antonín Rejcha, considered the "father of the wind quintet". The new album moves us to the global 20th-century quintet repertoire. At the same time, it can be referred to as our ensemble’s “Best Of”, as we have a specific relation to each of the pieces. This time, we paid special attention to the sound. We and the sound engineer Jakub Hadraba checked the acoustics of the Dvořák Hall of the Rudolfinum in several places – on the stage, as well as in the auditorium.

Why did you invite Radek Baborák to oversee the recording?

Just like everything pertaining to the album, there is a story behind this collaboration. We actually formed our ensemble because we so admired the legendary Afflatus Quintet. We simply aspired to play like them. All our members were fortunate enough to have had the opportunity to study with the Afflatus Quintet. The bassoonist Ondřej Roskovec even used to lead our quintet. We have ultimately become friends, which we treasure, and that is how we came to know Radek Baborák. So, when we thought of inviting someone to oversee and motivate us during the recording, he was the one who immediately occurred to all of us.

What was his role in the process?

Our aim was to make the album as good as it could possibly be, so we thought Radek Baborák would be the ideal person to get the best out of us. Now and then you get bogged down in something, and also over time may cease perceiving all the details, or listen to yourself less. We did not make any major changes, rather consulted Radek Baborák about a few aspects, such as dynamic and tempo nuances.

Will you be performing the pieces featured on your new album at concerts too?

All the pieces on the new album have been staples of our concert repertoire for years. And nothing will change in this respect. In relation to the release, we have even prepared a tour, within which we intend to perform at alternative venues, presenting the music to young audiences. We will soon be giving concerts in Hamburg and Žilina, Slovakia. Subsequently, we will appear at a festival in Ankara. And we are currently also preparing our own concert series.