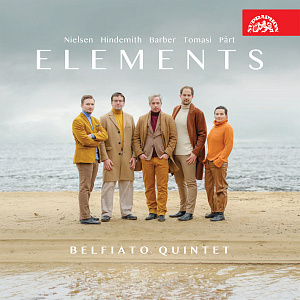 The compositions featured on their new album, titled Elements, are staples of the Belfiato Quintet’s modern repertoire and are, above all, music close to their hearts. The Belfiato Quintet are indisputably a world-class ensemble, with regard to the present album’s repertoire and beyond. Supraphon will release Elements on CD and in digital formats on Friday 25 March 2022.

Each of the pieces, by Carl Nielsen, Paul Hindemith, Samuel Barber, Henri Tomasi and Arvo Pärt, occupies a special position in the ensemble’s history. Nielsen’s Wind Quintet is the very first work they explored and performed, while their rendition of Cinq danses profanes et sacrées at the 2011 Henri Tomasi International Woodwind Quintet Competition in Marseille earned them the prize for the best interpretation of a Tomasi composition. The five pieces, dating from between 1922 and 1964, represent their creators’ specific “elements”, as well as the diverse music traditions of their native countries.

The Belfiato Quintet flautist Oto Reiprich said: “We primarily deem the album important with regard to the selected repertoire. Our first CD captures our accounts of works by the Czech composers Haas, Foerster and Janáček, while the second pays tribute to Antonín Rejcha, considered the ‘father of the wind quintet’. The new album moves us to the global 20th-century quintet repertoire. At the same time, it can be referred to as our ensemble’s “Best Of”.

The Belfiato Quintet invited the internationally renowned hornist Radek Baborák to oversee the recording at the Rudolfinum in Prague. “Our aim was to make the album as good as it could possibly be, so we thought Radek Baborák would be the ideal person to get the best out of us. Now and then you get bogged down in something, and also over time may cease perceiving all the details, or listen to yourself less. We did not make any major changes, rather consulted Radek Baborák about a few aspects, such as dynamic and tempo nuances.”

The “elements” in the album’s title may also refer to five highly distinct figures who – perhaps precisely owing to their being so distinct – form a superbly harmonised ensemble that possesses a remarkable variety of tone quality and shades of expression. The Belfiato Quintet are made up of the flautist Oto Reiprich, the oboist Jan Souček, the clarinettist Jiří Javůrek, the bassoonist Jan Hudeček and the horn player Kateřina Javůrková.