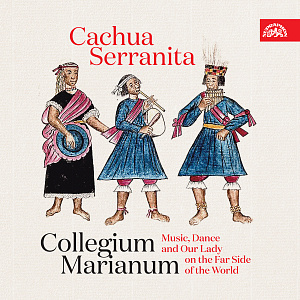 Collegium Marianum, a renowned ensemble this year celebrating the 25th anniversary of their formation, have focused on performing 17th- and 18th-century music, primarily that of Czech and other Central European composers. Over the past 15 years, Collegium Marianum have worked with the Supraphon label, which to date has released eight acclaimed albums of theirs, including within the revelatory Music of Eighteenth-Century Prague series. On Friday 25 February 2022, they will be joined by a new recording, bearing the mysterious title Cachua Serranita.

The album features works by the Czech composer Josef Brentner, the Italian Jesuit Domenico Zipoli, the Swiss missionary Martin Schmid and others pieces, which centuries ago were played in the indigenous peoples’ settlements in the middle of the jungle and in the mountains of Bolivia and Peru. Their music blended with the traditional local melodies, just as the Quechua language blended with Spanish.

Jana Semerádová, the artistic director of Collegium Marianum, said of their new album Cachua Serranita: “I was spurred to connect the two distant corners of the world not only by the music of the Baroque masters, including my beloved Brentner, whose scores were brought to South America in the missionaries’ sea chests, but also, in particular, by my passion for folk music and desire for discovering ‘truly barbarian beauty’, as Telemann referred to songs and dances from the Haná region of Moravia. European missionaries were equally enraptured by the musicality of the indigenous peoples of today’s Bolivia and Peru.”