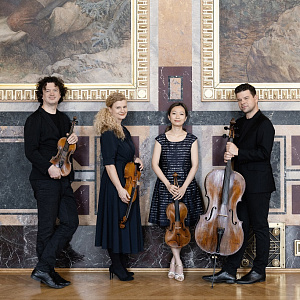 After almost two years afflicted by the pandemic, it would seem that culture has been slowly coming back to life. That at least applies to the activities of the internationally acclaimed Pavel Haas Quartet, who are soon to release a new album and are now preparing for an extensive concert tour.

The eagerly awaited album, the ensemble’s ninth, features Johannes Brahms’s String Quintet No. 2 in G major, Op. 111, and Piano Quintet in F minor, Op. 34. Like the majority of their previous recordings, it was made at the Domovina studio in Prague. And as in the case of the album containing Antonín Dvořák’s quintets, which received the Gramophone Classical Music Award in the Chamber category (2018), the Pavel Haas Quartet invited to the studio special guests – the violist Pavel Nikl (a former PHQ member) and the pianist Boris Giltburg. The album is scheduled to be released in May 2022.

At the end of January and the beginning of February, the Pavel Haas Quartet will give concerts in Ostrava and Brno, following which they will leave the Czech Republic and set out on tours of Europe and North America. They will be performing at such prestigious venues as De Bijloke in Gent, the Graz and Vienna Musikvereins, the Elbphilharmonie in Hamburg, the Meistersingerhalle in Nuremberg, the Konzerthaus in Berlin, the Muzikgebouw in Amsterdam and Wigmore Hall in London, and also appear at renowned festivals, including the Flagey Piano Days in Brussels and the East Neuk Festival in Scotland. In March, the ensemble will make a tour of Canada and the USA, within which they will visit Vancouver, Portland, Napa, San Francisco, Minneapolis and Salt Lake City.

This year the Pavel Haas Quartet will be celebrating their 20th anniversary. The ensemble was formed in 2002 by Veronika Jarůšková and Pavel Nikl, a member until 2016, when he had to leave for family reasons. Yet their collaboration has continued – Pavel Nikl has been the PHQ’s permanent guest when performing string quintets. The venerable BBC Music Magazine has ranked the Pavel Haas Quartet among the 10 greatest string quartets of all time, alongside the Alban Berg Quartet, Amadeus Quartet, Borodin Quartet and other stellar ensembles.