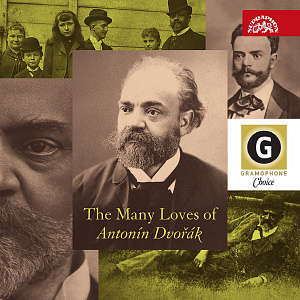 FOR THE MANY LOVES OF ANTONÍN DVOŘÁK

On the occasion of the 180th anniversary of Antonín Dvořák’s birth in September 2021, Supraphon released the special triple album The Many Loves of Antonín Dvořák, compiled by Patrick Lambert, a former long-time music editor and BBC Radio 3 producer. The extensive selection contains recordings of chamber, orchestral and vocal works made by superb musicians in the second half of the 20th century that are still exemplary and unrivalled in many a respect. The album has been selected as an Editor’s Choice / Reissue - Archive of the Month in the February issue of Gramophone magazine!

"At first glance, Supraphon's four-disc 'The Many Loves of Antonín Dvořák' looks as if it might be a 'greatest hits' miscellany aimed at the widest possible audience. Granted that high-volume sales are always a priority; but this set is different, primarily because it has been compiled by Dvořák expert Patrick Lambert, a one-time producer for BBC Radio 3 whose knowledge of Czech repertoire on disc - and of the Supraphon label (on which this collection is based) in particular - is second to none... I'd recommend settling down to listen 'blind', so that each rarity can make its full impact. A terrific set."