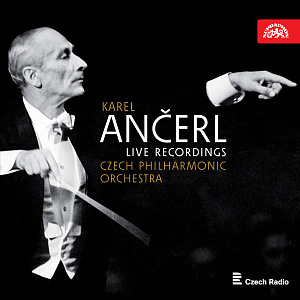 Karel Ančerl was one of the most distinguished conductors in post-war Europe. A survivor of Nazi concentration camps, as well as the openly anti-Jewish policy of Communist Czechoslovakia. An artist who through his limitless patience and diligence transformed the Czech Philharmonic into a world-class orchestra and brought them to the most prominent concert venues all over the globe.

Supraphon released the major part of Ančerl’s legacy, the complete studio recordings he made with the Czech Philharmonic, between 2002 and 2008 within the highly acclaimed 48-CD Ančerl Gold Edition. Yet the Czech Radio archives maintain numerous recordings of live Czech Philharmonic concerts Ančerl conducted, which complete the picture of the exceptional figure.

The present Supraphon compilation, comprising 15 CDs, includes works never recorded in a studio, a repertoire ranging from Mozart to Ančerl’s contemporaries. It features gems by Dvořák (Symphonies Nos. 7 and 8, Biblical Songs) and Suk (Asrael, Ripening), by Ančerl’s beloved Martinů (Symphony No. 1) and Kabeláč (Symphony No. 5), as well as splendid opuses by major 20th–century composers (Debussy, Ravel, Strauss, Prokofiev, etc.).  The recording of a concert in May 1968 within the Prague Spring festival of Smetana’s My Country is one of the last Ančerl made before moving to and settling in Toronto.

When the music world was celebrating the centenary of Karel Ančerl’s birth, Ivan Medek, who worked closely with the conductor during his tenure at the helm of the Czech Philharmonic, recalled: “Whenever I listen to Ančerl’s recordings, I am fascinated by their sound and perfection. I think they attest to an illustrious, perhaps the most illustrious, era of the Czech Philharmonic. Interestingly, Karel Ančerl’s physical gestures at the podium never evoked a romantic approach, many people considered him to have primarily been a rhythmicist and a meticulous educator of the orchestra. Yet when I listened to his recording of Brahms’s Symphony No. 1, I was surprised by his ample phrasing and by how much freedom the account contains.”