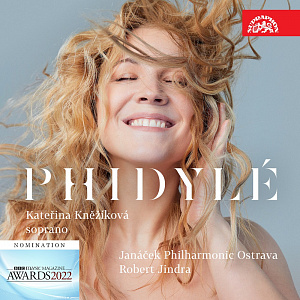 The album titled Phidylé, made by the soprano Kateřina Kněžíková and the Janáček Philharmonic Ostrava under the baton of Robert Jindra, has garnered critical acclaim since its release last May (Gramophone Editor's Choice). Now it has been selected as one of the three BBC Music Magazine Award nominees in the “Vocal” category. The BBC Music Magazine Awards solely pertain to classical music and, unlike the majority of other prestigious accolades, the winners are chosen via public internet polling worldwide.

Kateřina Kněžíková's debut Supraphon solo album features enchanting fin de siecle songs, "... songs that are particularly close to my heart and voice, all of them dating from the turn of the 20th century, all of them tinged with Impressionism," as the singer herself put it. The first of them is Bohuslav Martinů's Magic Nights, set to Chinese poetry. Henri Duparc's songs, one of which, depicting Phylidé, a simple and pious country girl, has given the album its title, may come as a revelation to many a listener. All the songs chosen for the CD reflect a penchant for the exotic, foregrounding connection with Nature and intuition. Conducted by Robert Jindra, the Janáček Philharmonic Ostrava has created a splendidly colourful backdrop for Kateřina Kněžíková's soprano to embellish.

The 27 albums that have received nominations were released last year by 17 renowned labels all over the world. The recordings, divided into nine categories (Chamber, Orchestral, Concerto, Choral, Opera, Instrumental, Vocal, Newcomer and Premiere), are the best of around 175 albums that were reviewed in BBC Music Magazine during the course of the past year.

The winners of the BBC Music Magazine Awards will be announced at a ceremony on 28th April 2022 at Kings Place in London.