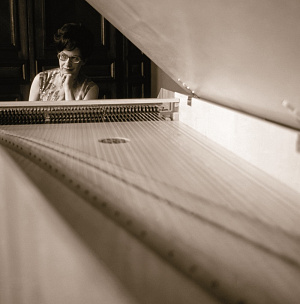 The Czech harpsichordist and the wife of the Czech composer Viktor Kalabis Zuzana Růžičková would celebrate her 95th birthday today.

Born in 1927 in Pilsen, Zuzana Růžičková survived the inconceivable horrors of the Nazi concentration camps of Terezín, Auschwitz and Bergen-Belsen. Together with her husband, they refused to join the Czechoslovak Communist Party and faced political persecution as a result. She was the very first person to initiate the gigantic project of recording the complete harpsichord concertos composed by Bach. This project included the Supraphon recording she made with conductor Václav Neumann and their ensemble at the unsettled time of the Prague spring of 1968 and the subsequent invasion of the Soviet Army into Czechoslovakia. She died on 27th September 2017 in Prague.