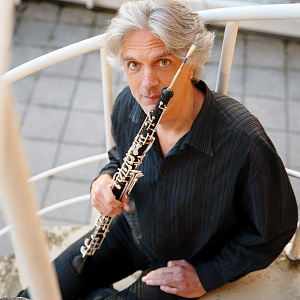 As Dominik Wollenweber's fat­her was an English horn player with the Bayerisches Staatsorchester, he heard the instrument’s en­grossing sound throughout his childhood. Yet he first played the traverse flute, before, at the age of 14, moving on to the oboe, which he studied with Hagen Wangenheim and later with Simon Dent at the Richard Strauss Conservatory in Munich. He established initial contacts with the Berliner Philharmoniker as a stipendiary of its Orchestra Academy in the early 1990s, when he took lessons from Hansjörg Schellenberger. At the time, Dominik Wollenweber became principal oboist of the European Union Youth Orchestra, led by the renowned conductor Claudio Abbado. After gaining this valuable experience, he won the audition for the vacated post of English horn player with the Berliner Philharmoniker. In addition to working with the orchestra and pursuing activities in the domain of chamber music, he has taught at the Hochschule für Musik Hanns Eisler Berlin. The father of six children, he primarily spends his leisure time with his family.

Dominik, you studied the flute and oboe. Why did you finally opt for the English horn?
I began playing the traverse flute at the age of nine. I had quite a bad stutter, and music-making had a therapeutic purpose. Playing the flute, during which air flows continuously without any pressure and you don’t have to make much effort, helps alleviate the condition. When I was 14, I moved on to the oboe. And when it comes to the English horn, the main reason for taking it up was winning the audition for a post with the Berliner Philharmoniker. I also have a natural penchant for the instrument because my father was a cor anglais player and I grew up with its sound.

Could you give a brief summary of your new album, to be released on Supraphon?
I would really like to present the English horn as a solo instrument, and to convince music lovers that it should no longer be deemed just a part of the orchestra. The English horn can generate a variety of tone shades. It may sound humorous, as in Jean Françaix’s quartet; it can be virtuoso, as in Bach’s concerto; and it also has the naturally pensive, melancholy colour. I think that the diversity of the music featured makes the album The Art of English Horn special indeed, with the mixture of dramatic colours having the potential to captivate the listener. Or at least I hope so. I wouldn’t want to single out any of the pieces I have recorded. I love every one of them.

You have been with the splendid Berliner Philharmoniker for almost three decades. What does it mean to you?
Being part of the orchestra, which aims to be the world’s best, is a source of pride and delight. I have felt honoured virtually every day over the past three decades. With regard to being allowed to work independently and to take independent decisions, each and every member bears special responsibility, which players with other orchestras, in which all decisions come from above, do not have. Every one of us is aware of being part of a whole and is responsible for our projects and concerts succeeding. Owing to the energy released as a result, the everyday work with the Berliner Philharmoniker is creative and intense, and there’s never a dull moment.

Vilém Veverka is a globally acclaimed oboist. A true master of his instrument, he has garnered coveted accolades at international competitions, has gained experience as a member of the Berliner Philharmoniker and performed with chamber formations (Ensemble Berlin Prag, PhilHarmonia Octet). His extensive repertoire stretches from Baroque to contemporary music. Yet Vilém Veverka has also pursued many other activities, a case in point being his having produced an album by Dominik Wollenweber, one of the world’ finest cor anglais players, titled The Art of English Horn.

Vilém, how do you, as an active musician, perceive the role of the producer of Dominik Wollenweber’s al­bum?
It wasn’t the first time I’d undertaken such a task. Three years ago, I was in charge of recording Jan Dismas Zelenka’s trio sonatas with Ensemble Berlin-Prag, a project even more challenging in terms of logistics. As regards Dominik Wollenweber’s al­bum, due to our long friendship, it was also an act of personal aspiration, or, better said, pride. I simply felt obliged to produce the album, notwithstanding the difficulties caused by the Covid pandemic and other circumstances. So I am really happy that the recording has been made. But my work hasn’t finished with the album’s release. We have commitments towards the partner, France’s Buffet Group. Accordingly, we will continue with the project in 2022, which is good.

How do you feel about the outcome?
Joy, that is the outcome! We present to the listener a true gem, a wonderful musical accomplishment, entirely in line with Johann Wolfgang Goethe’s maxim: “In art the best is good enough!”