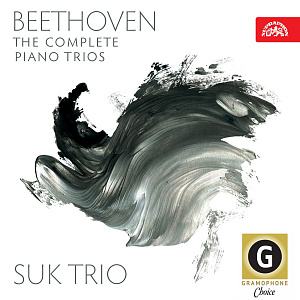 FOR THE SUK TRIO AND THEIR BEETHOVEN'S COMPLETE PIANO TRIOS

In July 2021, Supraphon released the complete album of Ludwig van Beethoven‘s piano trios recorded by the Suk Trio. The recordings were made for Nippon Columbia within a short timeframe, from June 1983 to April 1984, at the Rudolfinum in Prague. They capture the mature ensemble when it included the pianist Josef Hála, who in 1980 had replaced Jan Panenka. The album has been selected as an Editor’s Choice in the Awards issue of Gramophone magazine!

„Turning to the venerable ‘old guard’, Supraphon has reissued the Suk Trio’s complete recording of Beethoven’s piano trios, the line-up not Suk, Panenka and Chuchro (the legendary configuration from 1960 onwards who recorded Op 1 No 3, the Ghost and the Archduke, also for Supraphon – 5/09) but with pianist Josef Hála replacing Panenka’s quiet virtuosity with parallel virtues of his own. Both players fit the mould to perfection and perhaps the best place to sample, initially, would be the Archduke’s en­dlessly songful slow movement. For an example of the Trio’s elegance, try the same work’s finale, whereas to hear them playing flat out I’d suggest you try the closing Presto of Op 1 No 2.“