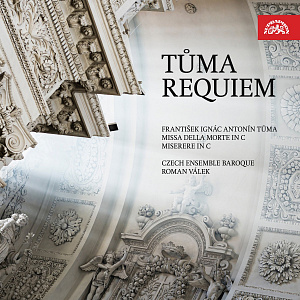 Czech Ensemble Baroque, led by the artistic director and conductor Roman Válek, have over the past 23 years focused on early music and its historically informed performance on period instruments. Their repertoire primarily encompasses Baroque and Classicism. It thus comes as no surprise that following four acclaimed recordings of rediscovered F. X. Richter works, the ensemble have turned their attention to the oeuvre of František Ignác Antonín Tůma, one of the Czech composers to have considerably influenced 18th-century European music. Along with J. D. Zelenka and G. T. Muffat, he has been named among the finest pupils of Johann Joseph Fux, and, just like Zelenka, he rubbed shoulders with the political and social elite of his time. Tůma was highly esteemed in Vienna, and his sacred music even served as a model for younger composers, including Joseph Haydn and W. A. Mozart. On 15 October 2021, Supraphon will release Czech Ensemble Baroque’s remar­kable new album, featuring Tůma’s Missa della morte in c and Miserere in c.

F. I. A. Tůma’s music, just like the work of J. S. Bach’s sons, was evidently anchored in the late-Baroque era. At the peak of Tůma’s career, G. F. Handel premiered in Dublin his Messiah and J. S. Bach was putting the finishing touches to the Mass in B minor. After the death of Charles VI’s widow, Empress Elisabeth Christine, Tůma mainly wrote sacred music in Vienna, before moving to the monastery in Geras, where he refined his singular style. The question arises of to what degree Tůma’s music is linked with the Galant style and other idioms of the nascent Classicism.

“We can deem Tůma’s most significant period to have been from 1741 to 1750, when he served as Kapellmeister of the music ensemble set up by Charles VI’s widow in Vienna. Owing to the spiritual themes he focused on, his style was akin to that of J. S. Bach. Tůma had an unconventional approach to harmony and was a master of counterpoint. So I decided to present him to listeners in his true light – as a late-Baroque composer who, similarly to J. D. Zelenka, deserves global recognition for his unique style within 18th-century church music,” Roman Válek said.

A skilful theorbo and viola da gamba player, at the age of 19 Tůma most likely participated in the celebrations marking the coronation in Prague of Emperor Charles VI in 1723. Nineteen years later, in 1742, Tůma’s Requiem in c accompanied the soul mass for the self-same monarch on the occasion of the transfer of his remains to the Capuchin Crypt in Vienna. The piece, whose instrumentation was commensurate to the significance of the event (the orchestra was enhanced by a cornett, two trombones, a bassoon and two natural trumpets), was again heard at the funeral of Elisabeth Christine herself, in 1750. Tůma also enjoyed great respect on the part of Empress Maria Theresa, who probably personally commissioned from him the Miserere in c.

Roman Válek explained what was the most difficult aspect of recording Tůma’s Requiem: “We had to bear in mind that we were reconstructing music that is based on the sound of the church organ. So we had to find a compromise between colla parte and solo instruments, and to render faithfully the coro favoriti versus tutti structure. That is a really tough nut to crack.”

The album containing recordings of Tůma’s Requiem. Missa della morte in c and Miserere in c, as performed by the renowned Czech Ensemble Baroque, conducted by Roman Válek, and the sopranos Markéta Böhmová and Romana Kružíková, the altos Monika Jägerová and Lucie Karafiátová Netušilová, the tenor Jakub Kubín and the bass Jiří M. Procházka will be released by Supraphon on 15 October 2021 on CD and in digital formats.