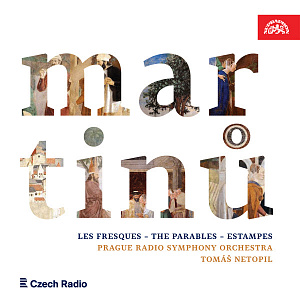 CLASSICAL ALBUM OF THE WEEK ON THE SUNDAY TIMES

The new album by Prague Radio Symphony Orchestra conducted by Tomáš Netopil featuring late works by Bohuslav Martinů composed between 1953 to 1958 has been chosen as one of the Classical Albums of the Week on The Sunday Times.

„Having completed his series of six symphonies in 1953, during the remaining six years of his life Bohuslav Martinu wrote the works collected here as his final compositions for orchestra. Three triptyehs — Les Fresques (1955), The Parables (1957), Estampes (1958) — followed in quick succession, confirming Martinu’s eclectic mastery of orchestration and his reversion to a post-romantic style, after flirtations in the 1920s with jazz idioms, and in the 1930s with neoclassicism. Even in these late works a Stravinskyian spikiness leavens washes of post-impressionist reminiscences of Debussy or Ravel, yet this music never sounds imitative, and deserves wider exposure. These Prague performances, conducted with dedication and flair by Martinu’s com­patriot, Netopil — who adds the neo-baroque Overture (1953) and Symphonic Prelude, The Rock (1937) for good measure, deserve to win more friends for this still underplayed music.“