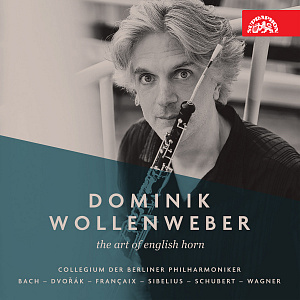 SUPRAPHON TO RELEASE AN ALBUM BY DOMINIK WOLLENWEBER

ONE OF THE WORLD’S FINEST ENGLISH HORN PLAYERS!

Ranking among the world‘s top cor anglais players, Dominik Wollenweber has been a member of the feted Berliner Philharmoniker for 28 years. Supraphon will soon be releasing an album of his, aptly titled The Art of English Horn, produced by his Czech colleague, the brilliant oboist Vilém Veverka.

Conducted by Sir Simon Rattle, the Berliner Philharmoniker accompany Dominik Wollenweber in Sibelius’s won­derful tone poem The Swan of Tuonela, while members of the orchestra keep him company throughout the present recording. One would be hard pressed to imagine an album dedicated to the English horn lacking the Largo from Antonín Dvořák’s New World Symphony or the solo from Richard Wagner’s Tristan und Isolde. On the other hand, J. S. Bach’s Concerto in G major and Schubert’s Im­promptu No. 3 may come as a surprise, while Jean Françaix’s Quartet is simply bound to lift the listener’s spirit.

The Art of English Horn is a truly remarkable album, teeming with the engrossing sound of the English horn. Dominik Wollenweber said: “I would really like to present the English horn as a solo instrument, and to convince music lovers that it should no longer be deemed just a part of the orchestra. The English horn can generate a variety of tone shades. It may sound humorous, as in Jean Françaix’s quartet; it can be virtuoso, as in Bach’s concerto; and it also has the naturally pensive, melancholy colour. I think that the diversity of the music featured makes the album The Art of English Horn special indeed, with the mixture of dramatic colours having the potential to captivate the listener. Or at least I hope so. I wouldn’t want to single out any of the pieces I have recorded. I love every one of them.”

Supraphon will release the album Dominik Wollenweber – The Art of English Horn for global distribution on Friday 15 October 2021 on CD and in digital formats.