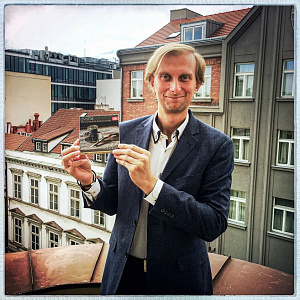 Dvořák’s works for solo piano are in the main an unexplored landscape even for many a pianist and musicologist. This segment of his music lacks Chopin’s sway and finely nuanced emotionality, nor does it possess Liszt’s osten­tatious virtuosity. Just as he did in his entire oeuvre, in his piano works too Dvořák eschewed flashiness, focusing instead on tender intimate lyricism, teeming with ideas, and shaping even his miniatures with the sensibility of a genius. Such music is certainly worthy of a new complete album. The challenging task was undertaken by Ivo Kahánek, an artist whose recording of Dvořák’s Piano Concerto made with the Bamberger Symphoniker conducted by Jakub Hrůša has deservedly gained critical acclaim and even won the coveted BBC Music Magazine Concerto Award. The present 4-CD set encompasses larger cycles (Silhouettes, Poetic Moods and the Suite in A major, composed in the US, which Dvořák himself valued greatly), occasional pieces, as well as several little-known works, recorded for the very first time. We talked with Ivo Kahánek shortly before the release of the album of Antonín Dvořák’s complete piano works.

Ivo, how did you prepare for the months-long recording, what did you find the most difficult and what delighted you the most?
Preparations actually began back in the autumn of 2020, when I gave a concert featuring Dvořák’s music at Dvořák Prague and was the patron of the marathon of Dvořák’s pieces for solo piano within the same international festival. Yet I would only learn most of the repertoire in the spring of 2021, directly for the purpose of this recording. The most difficult thing to cope with was the time pressure, since due to the availability of the hall and the team, as well as to the fixed date of the album’s launch (8 September 2021, marking the 180th anniversary of Dvořák’s birthday, within Dvořák Prague at the Dvořák Hall), we had to record five hours of music within a mere three months. The most gratifying aspect was discovering some little-known gems among Dvořák’s numerous piano works and having the opportunity to view the better-known pieces in a new way.

What do you like the most about Dvořák’s music?
I really like Dvořák’s sincerity and his innate Slavonic fervency. While Bedřich Smetana, for instance, deliberately built the foundations of Czech national music, Dvořák (also owing to Smetana) created the Czech sound absolutely effortlessly. And Dvořák’s music often comes across as spontaneous as though someone from above dictated it to him…

The cover of the CD set of your recordings features a photograph of Dvořák’s inkpot and the historical quill with which he wrote down music. Do you cherish such memorable objects?
Yes, I do, very much. I believe that such objects – and musical instruments in particular – have the unique quality of retaining their owners’ spiritual imprint in some form. We in the Czech Republic are indeed fortunate to be able to see things that once were among Dvořák’s personal effects, or even touch the piano once played by Dvořák.

You will launch the album at a special ceremony during the Dvořák Prague festival. What is your relationship to this international event?
Dvořák Prague is one of my favourite music events. I have given numerous performances at the festival, I was the very first curator of its Chamber Series, and I even have the honour of being a member of the Board of Academics of the Classical Music Academy, the festival’s or­ganiser.

Is there anything you would like to say in connection with your new album?
First and foremost, I would like to extend my thanks to the Classical Music Academy, the Karel Komárek Family Foundation and the Ministry of Culture, without whose support the CD set could not have come to fruition. I also thank the recording team, the Supraphon label and the director of the Dvořák Prague festival, Jan Simon, owing to whom the challenging task has been completed with a smile. And, finally, I would like to stress the help of my partner Jarmila, who as a pianist was another pair of ears and bravely withstood endless rehearsals day and night for several months.

Could you reveal your concert plans?
The pandemic (now dying away, hopefully) has also considerably complicated the plans of the majority of artists for 2021 and 2022. As a result, I too had to reschedule and postpone many concerts to future seasons. Nonetheless, I firmly believe I will be able to give my planned performances at festivals in Norway, Austria and Italy, as well as a debut recital at the Konzerthaus in Berlin. When it comes to my activities in the Czech Republic, I should primarily play within the subscription concerts with the Prague Symphony Orchestra and the Janáček Philharmonic Ostrava, and appear at the Lípa Musica festival.