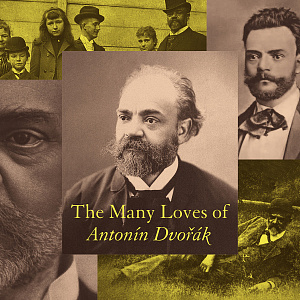 THE CELEBRATIONS OF THE 180TH ANNIVERSARY OF ANTONÍN DVOŘÁK’S BIRTH

TO BE ADORNED BY A SPECIAL 3CD SET

On 8 September 2021, the music world commemorated the 180th anniversary of Antonín Dvořák’s birth. To mark the occasion, Supraphon has released the special triple album The Many Loves of Antonín Dvořák, compiled by Patrick Lambert, a former long-time music editor and BBC Radio 3 producer. The extensive selection contains recordings of chamber, orchestral and vocal works made by superb musicians in the second half of the 20th century that are still exemplary and unrivalled in many a respect. Dvořák is paid tribute to by renowned Czech Philharmonic conductors (Talich, Ančerl, Neumann, Bělohlávek, Sawallisch, Mackerras, and others), instrumentalists (Rostropovich, May, Suk and Panenka), singers (Soukupová, Beňačková, Urbanová, Blachut, Novák), choirmasters (Jan and Pavel Kühn), as well as the Prague, Dvořák, Smetana and Panocha Quartets.

The album was put together by Patrick Lambert, a great lover and connoisseur of Czech music, who focused on the themes to which Antonín Dvořák had a strong, passionate affinity: Slavonic Soul, Nation and Homeland, Family, Musical Loves, Young Love Recalled, Humour, Nature, God and Religion. Besides widely known opuses (yet in lesser-known recordings), the set features many beautiful Dvořák pieces not performed overly often, including the cycles In Nature’s Realm, Love Songs and Poetic Tone Pictures, the Serenade for Wind Instruments, and scenes from the operas Dimitrij and The Jacobin. As Patrick Lambert puts it: “While planning the sequence, I was conscious of the importance of creating contrast in musical character and genre as well as the need to represent a broad spectrum of (mainly Czech) artists and ensembles, restoring to circulation many forgotten gems. Rather than merely serving up a selection of already familiar pieces, the sequence explores Dvořák’s hugely varied output in depth and, I would suggest, pays fitting tribute to this most Czech of composers on the anniversary of his birth as well as celebrating the unique riches of Supraphon’s ar­chive.”

Supraphon will be releasing the triple album The Many Loves of Antonín Dvořák on 10 September 2021 on CD and in digital formats.