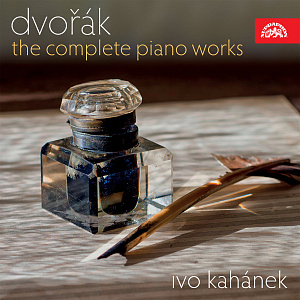 Dvořák’s works for solo piano are in the main an unexplored landscape even for many a pianist and musicologist. This segment of his music lacks Chopin’s sway and finely nuanced emotionality, nor does it possess Liszt’s osten­tatious virtuosity. Just as he did in his entire oeuvre, in his piano works too Antonín Dvořák eschewed flashiness, focusing instead on tender intimate lyricism, teeming with ideas, and shaping even his miniatures with the sensibility of a genius. Such music is certainly worthy of a new complete album. Upon the initiative of Supraphon and the Classical Music Academy, the challenging task was undertaken by Ivo Kahánek, an artist whose recording of Dvořák’s Piano Concerto made with the Bamberger Symphoniker conducted by Jakub Hrůša has deservedly gained critical acclaim and in 2019 even won the coveted BBC Music Magazine Concerto Award. The present 4-CD set encompasses larger cycles and occasional pieces, as well as several little-known works, recorded for the very first time. The album of Dvořák’ piano works provides yet another precious insight into the abundant world of the composer’s soul.

Ivo Kahánek recalled the creation of the new recording as follows: “Preparations actually began back in the autumn of 2020, when I gave a concert featuring Dvořák’s music at Dvořák Prague and was the patron of the marathon of Dvořák’s pieces for solo piano within the self-same international festival. Yet I would only learn most of the repertoire in the spring of 2021, directly for the purpose of this recording. The most difficult thing to cope with was the time pressure, since due to the availability of the hall and the team we had to record five hours of music within a mere three months. The most gratifying aspect was discovering some little-known gems among Dvořák’s numerous piano works and having the opportunity to view the better-known pieces in a new way.”

Ivo Kahánek’s complete recording of Antonín Dvořák’s piano works will be released by Supraphon on 24 September 2021 for global distribution. The cover of the 4-CD set features a photograph of the composer’s inkpot and the historical quill with which he wrote down music.

Ivo Kahánek will present and launch his new album during the Dvořák Prague International Music Festival on 8 September 2021, the day marking the 180th anniversary of Antonín Dvořák’s birth, at the Dvořák Hall of the Rudolfinum within a concert of the Israeli pianist Boris Giltburg and the Pavel Haas Quartet. “Dvořák Prague is one of my favourite music events. I have given numerous performances at the festival, I was the very first curator of its Chamber Series, and I even have the honour of being a member of the Board of Academics of the Classical Music Academy, the festival’s or­ganiser. So I am happy to be able to launch my new album there,” Ivo Kahánek said.

The album was made with the generous support of the Karel Komárek Family Foundation, the Classical Music Academy, the Ministry of Culture of the Czech Republic and the Faculty of Music of the Academy of Performing Arts in Prague.