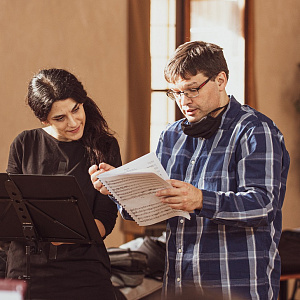 Founded in 2000, Hipocondria Ensemble have under the artistic guidance of the violinist Jan Hádek mainly focused on informed performance of 17th- and 18th-century music. They have given numerous concerts at home and abroad, and made recordings of works by, mainly Czech, 18th-century composers, including Josef Antonín Plánický, Bohuslav Matěj Černohorský, František Ignác Tůma, Jiří Antonín Benda and Josef Antonín Štěpán. Over the past two decades, Hipocondria Ensemble have ranked among the leading Czech chamber formations specialising in early music. On 27 August 2021, Supraphon released their new album featuring Šimon Brixi’s Missa ex D, Arietta De gloriosissima resurectione Domini nostri Jesu Christi, Litaniae de venerabili sacramento, Alma redemptoris mater, Domine ad adjuvandum me festina and Magnificat.
Hipocondria Ensemble and the outstanding soloists – the soprano Hana Blažíková and the bass Jaromír Nosek – have brought back to life Šimon Brixi’s overlooked works. Their present album contains world premiere recordings. The Magnificat was recorded on period instruments for the first time. The album is a new instalment in Supraphon’s highly rated Music from Eighteenth-Century Prague series. It was instigated and generously funded by Mrs. Klára Kroftová and Mr. David Krofta. Prior to the release, we talked to Jan Hádek, the artistic director of Hipocondria Ensemble, and David Krofta, the album’s producer.

How difficult was it to put together the album’s reper­toire?
The recording was instigated by David Krofta, a friend of mine whom I have known since primary school. He told me that he would like to support an album featuring some beautiful, not previously recorded music. Putting together the album’s repertoire took us more than two years. My initial idea was to record the Magnificat by Šimon Brixi and pieces by his son František Xaver. After consultations with and with the aid of the musicologist Marc Niubó, I began seeking suitable works, yet this approach soon proved to be unfruitful. As the quest continued, other options suggested themselves, including music by Giovanni Battista Bassani, Antonio Lotti, etc. But, for various reasons, these variants did not appear ideal either. After some time, I returned to Šimon Brixi and began pondering whether the small volume of his works that have survived could make up a presentable selection for an album. I was choosing from approximately two dozen sacred works, located in various places, some of which I had to rule out due to their being unavailable. And other pieces had to be crossed off the list too after during their transcribing we found out that they were arrangements dating from the second half of the 18th century, containing changes in voice leading and instrumentation, as well as numerous errors. Six compositions were ultimately identified as suitable for recording. In hindsight, I don’t regret all the work and deliberations, since we have succeeded in choosing really beautiful, exquisite pieces which deserve to be performed again.

How did the recording go?
The recording process was, of course, affected by concerns pertaining to the coronavirus pandemic. If someone had fallen ill, the project’s mate­rialisation would have had to be rescheduled, which would have brought numerous problems. I think it was a minor miracle that everything went smoothly, without complications. It was a great joy and delight to work with such brilliant singers and instrumentalists. The atmosphere at the recording sessions was amicable. I would also like to express my gratitude for the immense enthusiasm and devotion of all those participating in the project.

Could you compare Brixi’s music with Zelenka’s?
In his time, Šimon Brixi was a highly respected composer and his music, although not published, was frequently performed. We know that Jan Dismas Zelenka had in his possession copies of Brixi’s scores, while Brixi was familiar with Zelenka’s works. Both of them were influenced by Italian music and both of them primarily wrote sacred pieces. Just as in the case of Zelenka, we cherish Brixi’s singular compositional style, splendid and ample melodic invention, the sincerity and the contemplative nature of his music.

What do you consider to be the album’s signi­ficance within the international context?
I firmly believe that Šimon Brixi’s music deserves attention and that it occupies a firm position in 18th-century European music. So I hope that our album will revive interest in the oeuvre of this distinguished, yet overlooked Czech Baroque composer.

DAVID KROFTA
Mr. Krofta, what made this project so intriguing that you decided to support it as a producer, owing to which the recording could materialise?
The sequence of the story is different. Approximately five years ago, my wife and I approached Jan Hádek, suggesting we could support his ensemble in making a CD. Accordingly, our initiative preceded the selection of specific music material. We gave Jan a relatively free rein, with his task being to seek high-quality (and not previously performed) scores, which Hipocondria Ensemble – if we would agree on the selection – would subsequently record. From the very beginning, it was clear that the album would feature Baroque music, in which Jan specialises, and that the completed master would be presented to Supraphon. There were no other conditions.
About half a year after we came up with our proposal, Jan and his colleagues submitted the first list of pieces for the album. My wife and I were satisfied, but Supraphon persuaded us that the repertoire wasn’t ideal. Jan suggested recording Antonio Lotti works. Yet Supraphon explained to us that Czech musicians and a Czech label are primarily expected to perform music of Czech composers, adding that, notwithstanding the craft of Jan Hádek and Hipocondria Ensemble, such an album could “sink without trace”. So we returned to the very beginning, and Jan continued seeking interesting scores, this time solely of Czech provenience. And almost another two years down the road, we agreed that Šimon Brixi was the right choice and also that the pieces that were selected from among those discovered were the most suitable given the duration determined by the CD’s technical feasibilities. I deemed the album’s repertoire really splendid; the compilation is diverse and the compositions have no shortcomings. Every listener will, of course, have their own favourites, but, in my opinion, the album teems with energy from the first to the final bars.

What Hipocondria Ensemble qualities do you most value?
I have known Jan Hádek since primary school, he is my oldest friend (not in terms of age), and I highly value his sincerity and directness. And the same applies to Hipocondria Ensemble, who are true professionals, devoid of ostentatious gesture and affectation to boot. All the members of the ensemble gave everything, and I believe it can be heard on the recording. Not only are the Brixi pieces featured on the album magnificent, with some of the parts, I think, being truly extraordinary, their performance is genuine, heartfelt, with total engagement.

The recording took place in February 2021, a fraught time indeed for musicians and art lovers (and, naturally, for many others too). You attended the sessions in person – what was your impression?
With regard to the individual performers’ busy schedules, the recording date was set a considerable time in advance, back in the spring of 2019, when we had no inkling there would be a coronavirus pandemic, nor could we have even remotely imagined that which would follow. But the government restrictions pertaining to professionals in February 2021 did allow for the recording sessions to take place (it was necessary to abide by certain measures, such as reduced capacity of the hall and the like, but it did not affect our work, even when meeting all the epidemic regulations). Most significantly, all the engaged musicians were healthy. The rehearsals and recording lasted precisely 10 days, and throughout that time I feared that someone might fall ill; fortunately, everyone remained well until the very end. The epidemic did affect the recording, yet, in my opinion, in a positive way. In a normal time, it would have been just one of the many challenges the artists faced, and I have no doubt all of them would have acquitted of them with aplomb. During the pandemic, however, when most performances were cancelled and the musicians only occasionally appeared at online concerts, all those concerned were really happy to have had the opportunity to do their job. And, what is more, to record such wonderful music! As far as I could see, all those working on the album really enjoyed the recording. All along there was a great creative atmosphere among the ensemble members, which, I believe, can be heard on the recording. By and large, the opportunity to work on the album at the peak of the pandemic even multiplied the joy of everyone, myself included.

Hipocondria Ensemble are scheduled to play the pieces from the album in December 2021 at a concert at the Church of Saints Simon and Jude in Prague within the Prague Symphony Orchestra’s chamber music cycle. Next year, they will be presenting the same programme at the Saint Wenceslas Music Festival in Ostrava.