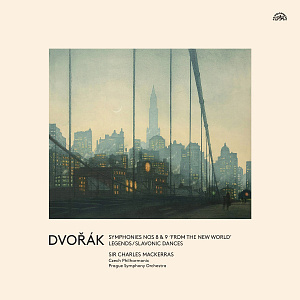 FOR THE FIRST TIME ON VINYL

For Antonín Dvořák’s 180th birthday on 8 September, 2021 Supraphon is issuing a real treat for those who love his music and for admirers of the unique legacy of the conductor Sir Charles Mackerras. On Friday, 27 August, for the first time on vinyl, the Supraphon label is releasing a three-record album of acclaimed recordings of Dvořák’s Symphonies Nos. 8 and 9, Legends, and Slavonic Dances wonderfully performed by the Czech Philharmonic and the Prague Symphony Orchestra made between 1999 and 2005 under the baton of the unforgettable Sir Charles Mackerras, a great admirer and promoter of Czech music who was awarded the Artis Bohemiae Amicis medal in 2010.

„I love Dvořák’s music with all of my heart. Besides Mozart, I have always regarded him as the best composer. He wrote symphonies, symphonic poems, operas, chamber music, songs, large-scale sacred works, and everything else… He’s simply the greatest composer apart from Mozart perhaps.“ These words were spoken by Sir Charles Mackerras, who not only loved Dvořák and Czech music, as is shown by the quote above, but was of incalculably valuable service to that music as a world-famous conductor. Of the wonderful recordings of Dvořák’s greatest symphonies, were we to seek out the best for publication on vinyl, Mackerras’s would definitely be included among them, with technically perfect sound and such authentically “Czech” musicality and temperament that even many of Dvořák’s compa­triots would envy. The recordings clearly show how much the young Mackerras managed to learn in Prague from his teacher Václav Talich. His recordings of the Eighth and Ninth Symphonies are exciting because of their liveliness, even in a literal sense – they are recordings of live concerts by the superb Prague Symphony Orchestra. Then the selection of Slavonic Dances and Legends (which received the 2003 Cannes Classical Award) has the air of nobility and the warmth of sound that are the unmistakable attributes of the Czech Philharmonic.

This set of three vinyl LP records is made to meet the top technical standards and is elegantly packaged to reveal true gems of the Dvořák discography with one of the world’s most important conductors.