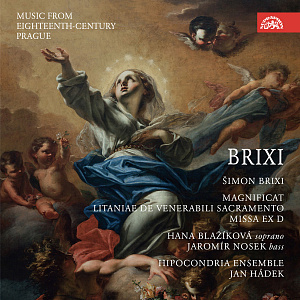 Hipocondria Ensemble have made a recording of the Czech renowned baroque composer Šimon Brixi's works in collaboration with outstanding soloists – the soprano Hana Blažíková and the bass Jaromír Nosek. The new album will be released by Supraphon on 27 August 2021. It includes Missa ex D, Arietta De gloriosissima resurectione Domini nostri Jesu Christi, Litaniae de venerabili sacramento, Alma redemptoris mater, Domine ad adjuvandum me festina and Magnificat. The album contains world premiere recordings. The Magnificat was recorded on period instruments for the first time. The album is a new instalment in Supraphon’s highly rated Music from Eighteenth-Century Prague series and will be available on CD and in digital formats.

In the first third of the 18th century, Prague was a major music centre, with Italian operas and concertos, French suites, Italian and German oratorios being performed in the city, and the local churches striving to acquire the latest and most virtuosic compositions. Šimon Brixi was one of the most distinguished composers to draw inspiration from this thriving culture, while creating highly inventive music of his own. He mainly wrote liturgical pieces, yet few of them have survived. Although he did not publish his scores, Brixi was a renowned composer and copies of his works were possessed by, among others, the celebrated Jan Dismas Zelenka. He mastered all the styles and techniques of his time, ranging from rigorous counterpoint to elements of the nascent Galant style.

Hipocondria Ensemble, who under the artistic guidance of Jan Hádek mainly focus on informed performance of 17th- and 18th-century music, have over the past two decades ranked among the leading Czech chamber formations specialising in early music. Šimon Brixi’s works are arranged on their new album in a one-day liturgical arch, with the morning mass followed by litanies and the canticle Magnificat from vespers, which owing to its style and technical requirements may bring to mind Zelenka’s music. „Putting together the album’s repertoire took us two years. My initial idea was to record the Magnificat by Šimon Brixi and pieces by his son František Xaver. After consultations with and with the aid of the musicologist Marc Niubó, I began seeking suitable works, yet this approach soon proved to be unfruitful. As the quest continued, other options suggested themselves, including music by Giovanni Battista Bassani, Antonio Lotti, etc. But, for various reasons, these variants did not appear ideal either. After some time, I returned to Šimon Brixi and began pondering whether the small volume of his works that have survived could make up a presentable selection for an album. I was choosing from approximately two dozen sacred works, located in various places, some of which I had to rule out due to their being unavailable. And other pieces had to be crossed off the list too after during their transcribing we found out that they were arrangements dating from the second half of the 18th century, containing changes in voice leading and instrumentation, as well as numerous errors. Six compositions were ultimately identified as suitable for recording. In hindsight, I don’t regret all the work and deliberations, since we have succeeded in choosing really beautiful, exquisite pieces which deserve to be performed again,“ Jan Hádek said.

Hipocondria Ensemble are scheduled to play the pieces featured on the album on 14 December 2021 at a concert at the Church of Saints Simon and Jude in Prague within the Prague Symphony Orchestra’s chamber music cycle. Next year, they will be presenting the same programme at the Saint Wenceslas Music Festival in Ostrava.