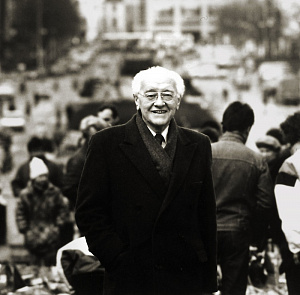 MARTIN RUDOVSKÝ: IT IS A PERSONAL, INTROSPECTIVE PROJECT

Can music lovers look forward to live performances of the pieces contained on the new album?
Yes, they can. In March 2022, we are scheduled to perform in concert Karel Husa’s Three Frescoes, Op. 7, actually a rediscovered work, whose very first studio recording the album features. The Prague Symphony Orchestra premiered the Three Frescoes in April 1949 under their then chief conductor, Václav Smetáček. The performance with their current chief conductor, Tomáš Brauner, will thus be the second ever, some seven decades after the first one!

What do you consider to be the greatest facet of Karel Husa’s legacy?
Similarly to other great Czech composers, he combined the Czech music tradition with the global one. He developed the suggestive idiom of Arthur Honegger, his mentor, into a highly singular expression, blending tenderness and harshness. Moreover, owing to Karel Husa, the world became more aware of Prague, the city that inspired a number of his scores.

What does Karel Husa’s music mean to you?
To a certain extent, I have discovered a new planet. I knew Husa’s famous Music for Prague 1968, yet his Symphony No. 2 and Three Frescoes are true revelations to me. Our lack of familiarity with his music should prompt us Czechs to broaden our horizon, even more so given that precious few composers, with perhaps the exception of Bedřich Smetana and Josef Suk, devoted to Prague as much as Husa did. Remarkable too is Husa’s embracing both the Czech and global music traditions.

What was the most challenging aspect when recording the album, and what was the most thrilling?
Husa’s music is totally dependent on precise rhythm and its expressive rendition. In this respect, his pieces are virtuosic when it comes to orchestra performance. A case in point is the second movement of Symphony No. 2. Besides the percussion group, great requirements are placed on the brass instruments, perhaps because originally Husa was a trumpeter. My enthusiasm resulted from the fact that all the challenges the orchestra and myself had to tackle served the purpose. Husa’s scores are difficult, yet absolutely clear, straight-lined even. They have a profound meaning and an excellent musical shape.