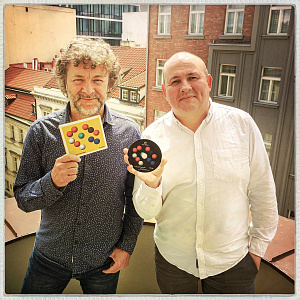 A NEW VIDEO AND CONCERTS LINED UP

The internationally esteemed ensemble Clarinet Factory are scheduled to give a series of performances, including on 21 August at the Terras Sem Sombra festival in Baixo Alentejo, Portugal, within which they will present last year’s album Pipers. And they are whetting audiences’ appetite with a new video clip, Než zavoláš, created by VJ Deja, a distinguished Czech visual artist.

When they could not give performances before audiences, Clarinet Factory did not throw in the towel. They spent the time productively, working on the soundtrack to the animated film Middle Watch; making a special re-edition with bonus tracks of their album Tenerife Blues with Jana Koubková; while Vojta Nýdl even recorded a solo album, Dítě z větru (with all his fellow Clarinet Factory members among the guests). Now, at long last, they will be able to perform live again.

“Clarinet Factory also place emphasis on the visual facet of their performances. If a concert space so allows, they involve their VJ, the video artist Jindřich Trapl, who provides accompanying projections to the music. During the depth of the Covid pandemic, the situation was reversed, and so Jindřich Trapl invited the ensemble to his space. Both physically – to his Xlab – and virtually, whereby Clarinet Factory were directly placed in surrealistic projections, using state-of-the-art technologies. As a result, the viewers are afforded a novel experience, one erasing the difference between video mapping and virtual reality,” Daniela Denešová alias VJ Deja said about the new clip for the song Než zavoláš.

What is more, the clip is the first in a series of three videos for tracks from the album Pipers, which the ensemble will put on their YouTube channel over the next few weeks. The premiere of the first of them is an “appetiser” for Clarinet Factory’s summer concerts. Following six performances in the Czech Republic, they will be appearing at the aforementioned Terras Sem Sombra festival in Portugal on 21 August.

For more news and information regarding the scheduled concerts and other Clarinet Factory activities, check out their Facebook and Instagram pages.