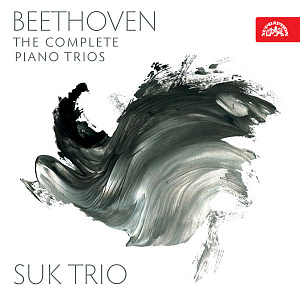 FOR THE FIRST TIME ON CD OUTSIDE JAPAN

The complete album of Ludwig van Beethoven‘s piano trios, to be released by Supraphon on 16 July 2021 on 4 CDs, features the Suk Trio, who soon after their establishment in 1951 gained international renown and recognition. Supraphon made the recordings for Nippon Columbia within a short timeframe, from June 1983 to April 1984, at the Rudolfinum in Prague. They capture the mature ensemble when it included the pianist Josef Hála, who in 1980 had replaced Jan Panenka.

The trio’s sound was dominated by the strings, primarily the violin of Josef Suk, who also defined the interpretation principles. The singularity of the ensemble and their recordings alike rests in infallible technique, sonic refinement, admirable interplay and profound musicality devoid of any showboating. “The Suk Trio’s impressive account of Beethoven’s scores was the result of their familiarity with the pieces, which they had previously performed at concerts, as well as, in the case of some of the piano trios, recorded. The music of an extraordinary composer was thus uniquely interpreted by the Suk Trio, whose approach to the overall sound remains peerless,” writes the music journalist, critic and dramaturge Boris Klepal in the sleeve notes for the new release of the precious archival recordings.

The 11 works Beethoven created for piano trio make up a group of pieces equally remarkable as his 16 string quartets. With over half of them written before 1800, prior to the composer’s turning 30, they clearly reveal his creative flights and struggles, first and foremost serving to attest to the grand formation of Beethoven’s com­positional principles and the attainment of his apex in his later opuses.