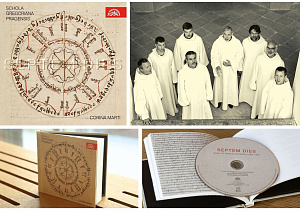 IN THE MIDDLE AGES, PRAGUE UNIVERSITY STUDENTS GOT TOGETHER TO SING EVERY DAY!

The new album made by the internationally renowned Schola Gregoriana Pragensis ensemble under its artistic director David Eben features the music played at the Prague university according to mid-15th-century sources, following the Hussite wars and the institution’s re­novation. Titled Septem dies, it provides a wide array of liturgical music, sacred pieces by young clerics, as well as music the university students played for entertainment. It includes Gregorian chant, anonymous creations and compositions by Bernard de Cluny, Petrus Wilhelmi de Grudencz and Antonio da Cividale. We talked to David Eben a few days prior to the album’s release.

Could you tell us more about the new album’s genesis?
We decided to conceive the new album in a different way, not like a mere “ordinary” CD. The project comprises two full-fledged products – the recording itself and an extensive accompanying text, a book that affords a comprehensive summary of the music and its historical background. Accordingly, it is a collective work, the result of co-operation between our ensemble and musicologists.

The album focuses on the music that was performed at the Prague university in the 15th century. You teach at the Institute of Musicology of the Faculty of Arts of Charles University. Does the recording reflect your personal feeling?
I confess that the album is a heartfelt matter for me. One of the project’s aims is to communicate the fact that the students at the Prague university were singing together every day, which I don’t think is generally known. The students and their teachers also constituted a religious community, performing liturgical pieces and chants. In addition, they held informal gatherings, at which they most likely indulged in secular music.

What does the album’s title Septem dies, Seven days in music at Prague university, refer to?
It all started when Jan Ciglbauer, a former doctoral student of mine, embarked on researching into the previously unknown repertoire of medieval poetic songs, which were closely related to the Prague university. The seminal document was the “Statutes” of one of the colleges, stipulating the liturgical services at which its students were obliged to perform. On the basis of that, we have succeeded in reconstructing the liturgical week, with every day dedicated to a special theme. I would also like to mention the splendid work of my colleague Lenka Hlávková, who primarily focused on the polyphonic repertoire.

The album features a very special guest. Could you tell us more about the artist?
We invited to work with us Corina Marti, a superb medieval music performer, who plays the recorder and the clavicimbalum, an ancestor of the harpsichord. This early keyboard instrument fitted into the album’s conception. Interestingly, wind instruments were viewed with a certain disdain at medieval universities, while keyboards were acceptable. And we were really happy that Corina Marti accepted our invitation.

Can your audience and fans look forward to hearing the album’s repertoire in concert?
We had plenty of plans for concerts in a number of places, yet unfortunately had to postpone them due to the pandemic. On our website www.gregoriana.cz could be found all actual dates and terms.