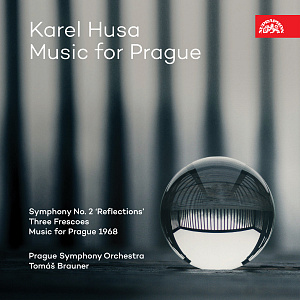 THE CENTENARY OF KAREL HUSA’S BIRTH

TO BE MARKED BY A NEW PRAGUE SYMPHONY ORCHESTRA ALBUM

Karel Husa – a Czech-born composer whose name resonates more on an international scale than in his native country. A Pulitzer Prize and Grawemeyer Award winner, similarly to other great Czech composers, he embraced both the Czech and global music traditions.

The centenary of Karel Husa’s birth (7 August) affords a unique opportunity to recall his remarkable fate and oeuvre. He witnessed the Nazi invasion of the Czech lands in 1939 and during World War II lived in occupied Prague. Following his graduation from the Prague Conservatory, with a concert performed with the Prague Symphony Orchestra (1944), Husa left for Paris to study composition with Arthur Honegger and Nadia Boulanger. After the Communist takeover in February 1948, he decided to remain in Paris and not return to his country. Consequently, over the next four decades Husa’s music would not be performed on Czech stages. In March 1954, after Cornell University in Ithaca, New York, had offered him a post teaching composition, music theory and conducting, he moved to the USA. In 1959, Husa was granted American citizenship and received tenure from Cornell. In 1968, he composed the legendary Music from Prague 1968 in protest against the Warsaw Pact invasion of Czechoslovakia in August that year, which he would only get to present in his homeland in February 1990, in the wake of the November 1989 Revolution. Besides being a composer and educator, Husa was a sought-after conductor, working with numerous world-renowned symphony orchestras.

The new album maps Husa’s creative periods between 1947 and 1983, and it features the very first studio recording of his Three Frescoes. Under the baton of its principal conductor, Tomáš Brauner, and led by the concert master Roman Patočka, the Prague Symphony Orchestra, closely connected with both Karel Husa and Prague, made the recordings at the Smetana Hall of the Municipal House in Prague. ”To a certain extent, I have discovered a new planet. I knew Husa’s famous Music for Prague 1968, yet his Symphony No. 2 and Three Frescoes are true revelations to me. Our lack of familiarity with his music should prompt us Czechs to broaden our horizon, even more so given that precious few composers, with perhaps the exception of Bedřich Smetana and Josef Suk, devoted to Prague as much as Husa did. Remarkable too is Husa’s embracing both the Czech and global music traditions,” said the conductor Tomáš Brauner.

The album Karel Husa – Music for Prague will be released for global distribution on Friday 25 June 2021, on CD and in digital formats. The project was supported by the City of Prague and OSA Partner.

In March 2022, the Prague Symphony Orchestra are scheduled to perform in concert Three Frescoes, Op. 7, which they premiered in April 1949 under their then chief conductor Václav Smetáček. The performance with their current chief conductor, Tomáš Brauner, will thus be the second ever, some seven decades after the first one.