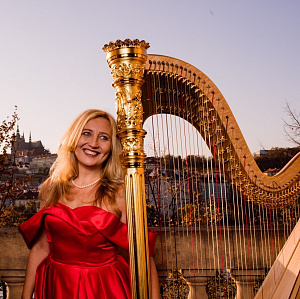 GREAT MUSIC IS TIMELESS AND HEALS THE SOUL!

Jana Boušková is one of the most globally distinguished harpists of the present day. Her acclaim comes as no surprise – she has garnered numerous prestigious accolades (first prizes at the USA International Harp Competition, Concours International de Musique de Chambre in Paris, Torneo Internazionale di Musica in Italy, etc.), performed at major venues all over the world alongside renowned artists (Rostropovich, Vengerov, Bashmet, Tetzlaff, and others), and she has gained recognition as a musician (solo harpist of the Czech Philharmonic) and teacher (professor at the Royal College of Music in London and the Royal Conservatory of Brussels) – to name but a few of her accomplishments. Yet Jana Boušková has never forgotten where her roots are and the tradition from which her own artistry and sentiment has grown. The new album, symbolically titled Má vlast, occupies a special position in her discography. By arranging for the harp their iconic pieces, Jana Boušková has paid tribute to the most celebrated Czech composers. Má vlast is her most personal profession of love for her homeland and the towering figures who shaped her musical landscape. Smetana, Dvořák and Suk made Czech music global – and Jana Boušková makes it resound all over the world again.

Your work paving the way to the release of the album Má vlast must have been challenging. What was the most difficult part of your task?
Work on the album, whose aim it is to present the harp as an instrument different from that which most listeners know, was a source of delight from the very beginning. Yet I must admit that making this great dream of mine come true was really demanding. Besides performing the music, I was arranging all the pieces featured on the album. It took me four years to complete the task. But I myself had decided to take up this great challenge. Even though a tough nut to crack, which entailed thousands of hours spent at my computer transcribing the scores, I never regretted my choice. The very opposite was the case – the more I worked on the arrangements, the further I advanced. As it was the first time I had worked on arrangements, I approached it meticulously, often mulling over a single bar for several days, until the result was precisely what I wanted it to be. I paid attention to every detail, with enormous care, as though nurturing my own beloved child. And that is how I perceive the album, which is entirely my own creation. No one anywhere had arranged the respective pieces for the harp. I felt an enormous responsibility for arranging some of the best-known compositions by the Czech masters, who did not write anything for solo harp, which was an immense challenge in itself. And after completing the arrangements, I had to rehearse and learn the music as a performer. I am immensely happy that I negotiated various obstacles and this extraordinary project has come to fruition. I approached performing the music with equal diligence and care. All the pieces are really difficult, and so rehearsing and learning them took me much longer than in the case of the regular harp repertoire. But the most difficult aspect? Actually everything I have mentioned was difficult, while concurrently I was stressed by the unrelenting pressure of time and the deadlines I myself had set for completing, rehearsing and recording the album. Time just ran so quickly. Depriving myself of proper sleep, I worked hard day and night, seven days a week. Yet it was definitely worthwhile, for my musical child was born and will now live and breathe. I sincerely hope that the album will make the listeners as happy at it has made me.

What was the recording like?
The circumstances under which I began making the album were fraught. Since the pandemic situation did not allow for continuous recording, we had to find dates when the entire team could get together. What’s more, I had to postpone three planned sessions due to health problems. First I had an inflamed finger, on another occasion, just before a recording session, already in the hall, I suddenly couldn’t feel two fingers on my left hand. For a month, I was out of action owing to a blocked vertebra in my neck. Yet notwithstanding such troubles, the recording made be very happy. I worked with an amazing team. The cooperation with the recording director Zdeněk Zahradník and the sound engineer Ondřej Urban was simply wonderful. They had infinite patience with me. As a true maximalist, during the recording sessions I sometimes insisted that a piece be repeated many times over, until we attained the outcome that satisfied me. The team often joked that we had enough material for several albums. I was also pleased to have actually heard the majority of the pieces performed for the first time, as I had never played them previously. So I can quite vividly imagine the great excitement composers feel when they first hear their music performed live… I had similar feelings when listening to my arrangements.

What is it like to play Smetana’s Vltava or Vyšehrad on the harp? – How did you feel when you performed scores you have played with the Czech Philharmonic, yet this time on your own?
When it comes to Smetana compositions, I would like to mention Šářka, which I haven’t performed as a member of an orchestra, since the instrumentation doesn’t include the harp. Given that My Country is among the pieces most frequently featured in the Czech Philharmonic’s con­cert programmes, as solo harpist since 2005 I have had the opportunity to play it at many venues worldwide under the baton of a number of conductors. I am seated with the orchestra throughout the first three poems of My Country, hence Šárka, in which the harp is not employed, is very close to my heart too. This personal experience certainly encouraged me to transcribe all three sections for the harp. And the notion of the sound of a full-scale orchestra provided me a great deal of inspiration for creating my arrangements for solo harp. I must confess that during the Czech Philharmonic’s re­hearsals for the concerts featuring My Country I played my solo harp arrangements during orchestral tutti. I personally feel really happy that all the hard work has paid off.

How are you coping with the difficulties caused by the ongoing pandemic? How are your performance plans shaping up? And will you be presenting your new album at concerts?
Owing to the pandemic, I was able to complete all the arrangements for the new album. Without having had the extra time, which I didn’t previously have due to my busy schedule, I simply wouldn’t have brought the recording project to fruition. At least the pandemic has been good for me in this respect. Yet, just like the majority of musicians, I naturally miss giving concerts and the feeling of joy resulting from communicating music to audiences. Therefore I am glad that by means of the new album I will reach out to listeners, and hopefully brighten up the hours they are compelled to spend at home.
As for concerts, things are still up in the air. Several planned performances keep getting put back, while in the case of others we are still waiting for the decision as to whether they will actually take place or not. The only events that have to date been confirmed are my performance in June at the Music Festival in Piešťany, Slovakia, and a concert in July at the Monastery Music Festival in Moravia, of which I am a patron. During the summer, I am also scheduled to appear at a music festival in Estonia, as well as at open-air concerts in Prague, where I would like to present pieces from the album Má vlast. Let’s hope that we will be able to materialise all our plans. I above all look forward to sharing this lovely music with audiences. Great music is timeless and is a tried-and-tested remedy for the soul.