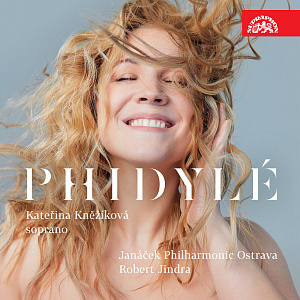 The Czech opera singer Kateřina Kněžíková will perform the title role in Leoš Janáček’s Katya Kabanova at the prestigious Glyndebourne Festival Opera in Sussex, England. At the present time, her debut Supraphon solo album is being prepared for release. Titled Phidylé, its repertoire is made up of engrossing songs by Bohuslav Martinů, Henri Duparc, Maurice Ravel and Karol Szymanowski, which Kněžíková recorded with the Janáček Philharmonic Ostrava, conducted by Robert Jindra.

Currently one of the most sought-after Czech opera singers, Kateřina Kněžíková was selected to appear at the Glyndebourne Festival Opera on the basis of an audition that took place two years ago and to which she was invited upon the recommendation of the conductor Jakub Hrůša. “The audition was two years ago in Berlin, and within a few weeks I was informed I had succeeded,” Kateřina Kněžíková said, adding: “Given the present circumstances, I consider having been afforded the opportunity to travel, rehearse and perform before an audience a great blessing!”

The Glyndebourne Festival Opera, held annually from May to August, is a major international cultural event, one of the world’s best–known and most popular among music lovers. Its organisers have always striven to focus exclusively on top-class projects, stressing that they provide artists with superb conditions. This year’s programme includes a production of Leoš Janáček’s opera Katya Kabanova, premiered a century ago. Kateřina Kněžíková will portray the title role, and she will stay in Glyndebourne for three months. Following the rehearsals, scheduled to last one and a half months, the first performance is planned for 20 May and the final one for 19 June.

Supraphon will release Kateřina Kněžíková’s album on 28 May on CD, as well as in digital formats, including Hi-Res Audio. Henri Duparc’s songs, one of which, depicting Phidylé, a simple and pious country girl, has given the recording its title, may come as a revelation to many a listener. “I certainly didn’t want to copy something that has been recorded several times. I would, however, like to stress my penchant for the song repertoire. When I was afforded the opportunity to make an album of my own, the question was what precisely I should use to present myself. How I wished to be perceived by music lovers. When I realised that my album should feature opera arias, the comparison would be highly uncompromising. What’s more, I simply love songs. And I think they have not been given sufficient scope in our country. I would like that to change. I believe that I have something to say with regard to this repertoire, as I feel at home with it,” is how Kateřina Kněžíková described her new album.