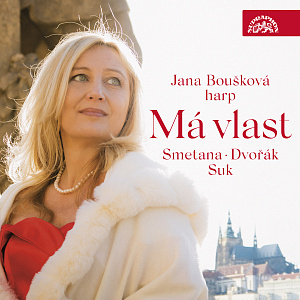 Jana Boušková is one of the most globally distinguished harpists of the present day. The only Czech to have won accolades at all the major international harp competitions, she has performed at prestigious venues all over the world alongside noted artists and orchestras. Moreover, she is a sought-after teacher, working at the Royal College of Music in London, the Academy of Performing Arts in Prague and other renowned schools. Yet Jana Boušková has never forgotten where her roots are and the tradition from which her own artistry and sentiment has grown. The new album, symbolically titled Má vlast, to be released by Supraphon on 14 May 2021, occupies a special position in her extensive discography. By arranging for solo harp their “iconic” pieces, Jana Boušková has paid tribute to celebrated Czech composers. Má vlast is her most personal profession of love for her homeland and the towering figures who shaped its musical landscape. Smetana, Dvořák and Suk made Czech music global – and Jana Boušková makes it resound all over the world again.

For Jana Boušková, the album Má vlast is a great dream come true: to present the harp as an instrument different from that which most listeners know. She has carried out all the arrangements herself, a task that took four years to complete. “As it was the very first time I had worked on arrangements, I approached it meticulously, often mulling over a single bar for several days, until the result was precisely what I wanted it to be. I paid attention to every detail, with enormous care, as though nurturing my own beloved child. No one anywhere had arranged the respective pieces for the harp. I felt an enormous responsibility for arranging some of the best-known compositions by the Czech masters, who did not write anything for solo harp, which was an immense challenge itself. And after completing my task, I had to rehearse and learn the music as a performer. All the pieces are really difficult, and so it took me much longer than in the case of the regular harp repertoire,” Jana Boušková said.

The circumstances under which Jana Boušková began making the album were fraught. Since the pandemic situation did not allow for continuous recording, the actual sessions were very intense. “I worked with an amazing team. The cooperation with the recording director Zdeněk Zahradník and the sound engineer Ondřej Urban was simply wonderful. As a true maximalist, during the recording sessions I sometimes insisted that a piece be repeated many times over, until we attained the outcome that satisfied me. The team often joked that we had enough material for several albums. I actually heard the majority of the pieces performed for the very first time, as I had never played them previously. So I can quite vividly imagine the great excitement composers feel when they first hear their music performed live,” Jana Boušková recalled fondly. “I have arranged Smetana’s Vyšehrad, Vltava and Šárka, as well as the Largo from Dvořák’s New World Symphony, in their entirety. Accordingly, all four pieces on the album are totally unique, no one has heard them like this before. Dvořák’s American Suite and Josef Suk’s Summer Impressions are taken over from their piano versions, which I only had to transcribe for the harp. I believe that these works sound even better on the harp, as a few pianists have said,” Jana Boušková added.

The album is imbued with the spirit of Prague: it was recorded at the Dvořák Hall of the Rudolfinum, while the booklet photographs were taken against the backdrop of the city’s most beautiful landmarks. Jana Boušková points out the curious fact that when spelled backwards PRAHA, the Czech name for Prague, becomes “A HARP”, suggesting that her instrument can perhaps render Má vlast better than any other.

Jana Boušková’s album Má vlast contains:
edřich Smetana’s Vyšehrad, Vltava and Šárka (3 symphonic poems from the cycle My Country); Antonín Dvořák’s Suite in A major, “American”, Op. 98, and Largo from Symphony No. 9, “From the New World”; and Josef Suk’s Summer Impressions, Op. 22b.