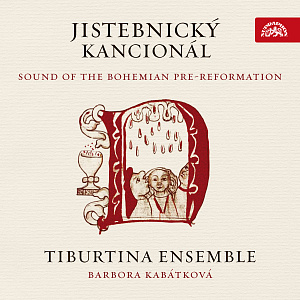 The internationally renowned Tiburtina Ensemble of female voices, headed by Barbora Kabátková, have made a recording of the Jistebnice kancionál, featuring songs for mass and prayer of the Liturgy of the Hours from the early 15th-century Prague university milieu. The manuscript contains a Latin hymn translated into Czech, as well as original music to Czech texts. Supraphon will release the album on Friday 23 April 2021 on CD and in digital formats.

When, in 1872, the student Leopold Katz discovered in the attic of the presbytery in the South Bohemian village of Jistebnice an old manuscript of Czech songs, he probably had no idea just how enormous its value was. Today, the hymnal, bearing the title Jistebnice kancionál, is primarily known for including the Hussite choral anthem Ye Who Are Warriors of God. (The melody has attained worldwide fame due to its inclusion in Smetana’s symphonic poems Tábor and Blaník, parts of the cycle My Country.) Yet the most notable aspect of the handwritten hymnbook is that it features songs in Czech for mass and prayer of the Liturgy of the Hours.
It would seem that the bold project’s aim was to make the liturgy accessible to the wide religious community in their own language. The creators evidently above all strove to translate Latin hymns into Czech, but they also wrote tunes of their own. Of a particularly high value is the record of the Easter liturgy that, owing to its detailed instructions, affords us a view of the Hussite form of worship.

Barbora Kabátková, Tiburtina Ensemble’s artistic director, considers the Jistebnice kancionál a great discovery: “I didn’t anticipate finding quite so much beautiful music there. During my musicology studies, I only had a superficial knowledge of the source, and nothing motivated me to examine it more closely. Only the research carried out by Hana Wörner–Vlhová opened my eyes and spurred me to explore the manuscript thoroughly. I personally consider its greatest value to be the contents, in terms of music and text alike. The hymnal provides us with an intimate insight into the people living in the late 14th and early 15th centuries.” A number of unanswered questions and mysteries still surround the Jistebnice manuscript. The present album, made by the internationally esteemed Tiburtina Ensemble, lifts the veil of mystery to a certain degree, with the bright female voices conveying the sheer beauty of the songs. “How wonderful my favourite Latin choral pieces sounded in Old Czech!” Barbora Kabátková says. “I consider the Jistebnice hymnal to be a great discovery, and hope that the listeners will perceive it in the same manner.”

TIBURTINA ENSEMBLE
The ensemble are named after a historical figure – Tiburtina (or the Tiburtine Sibyl), the best-known prophetess of the Middle Ages, mainly because her oracles were closely connected with Christianity. The parallels between the pagan sibyl and the Christian prophetess are striking: their noble origin, their preaching expeditions, inquiries from persons in positions of power, and the ability to see all the way to the end of the world, something which was denied to men, however learned they might be.