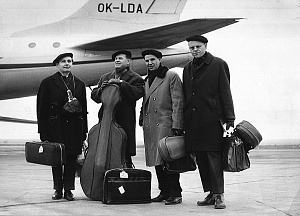 In August 2020, Supraphon released a superb recording of the Beethoven's com­plete string quartets by the legendary Smetana Quartet recorded at the turn of the 70's and 80's in Prague for Nippon Columbia. This splendid 7CD box-set is the very first release on CD beyond Japan. Below is a review of the box-set in the November issue of Gramophone.

„Then there’s Suprap­hon’s reissue of the Smetana Quartet’s beau­tifully engineered cycle for the Japanese Nippon Columbia label – its first release outside of Japan, in fact – recorded between 1976 and 1985, a vade mecum of subtle asides (try Op 59 No 1’s minutely shaded second movement), again with the Grosse Fuge serving as Op 130’s finale and the same quartet’s long first-movement repeat intact. The late quartets included here are not to be confused with the Smetana’s 1960s recordings of the same works (see Replay, 10/06), where there are some major differences tempo-wise and Op 130’s repeat isn’t observed (though the Grosse Fuge still serves to conclude the work). Here we also have Beethoven’s own quartet transcription of his Piano Sonata Op 14 No 1, perceptively performed, as is everything else in the set. If you find Quatuor Ébène just a little too immediate and full-on, then the Smetana’s blend of poise and passion should prove ideal (though the Harp’s Presto is a virtuoso tour de force).“