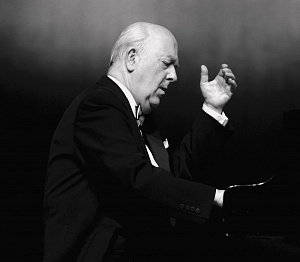 AS REMEMBERED BY CONTEMPORARY PIANISTS

On 9 November 2020, the globally renowned Czech pianist Ivan Moravec would have reached 90 years of age. To mark this significant anniversary, Supraphon is releasing the largest ever compilation (11 CDs + DVD) of his unforgettable recordings. Supraphon asked five major Czech pianists to convey their own memories of the great artist. The words of Jan Bartoš, Slávka Vernerová Pěchočová, Ivo Kahánek, Miroslav Sekera and Jitka Čechová provide a portrait of the extraordinary musician. Their accounts are completed by reminiscences of the American pianist Murray Perahia.

The first time I saw Ivan Moravec play live was when I was eleven years of age. That evening I was so dazzled that I decided to become a pianist too. His playing was seismographically sensitive and sincere, while also being firm and resolute. Such was Moravec himself too. The Portrait boxset affords you the opportunity to rediscover the artistry of one of the world’s greatest pianists.
Jan Bartoš

Every day, whenever I sit down at the piano, Ivan Moravec is by my side. I practise on the very instrument which he himself played throughout his life and which he gave to me. I could say that I still hear his voice, as I heard it twice a week over the nine years during which he gave me intensive lessons and another ten years during which he was my attentive and kind-hearted artistic mentor up until his passing. “Go back to that which you already had! Don’t play in gloves! Don’t disturb your circles! Fortune favours the prepared! Keep exercising! Et cetera …” When recalling him, I must first and foremost highlight the sheer integrity and honesty with which he, as a teacher, approached us all, as well as his personal sincerity. He loathed mediocrity, pretence and pushiness. Now I do my utmost to be the keeper of the flame. Ivan Moravec has left behind a large void!
Slávka Vernerová Pěchočová

Along with Rudolf Firkušný, Ivan Moravec is still considered the most distinguished Czech pianist that ever lived. Even though I was not a pupil of his and our encounters were rather sporadic and brief, I was truly enthralled by his obsession with attaining the perfect musical expression. I think that his meticulous work, paying attention to the tiniest detail, gave his creations the hallmark of a certain definitude, as though they were edged in stone. I find this humble approach to interpretation increasingly inspiring, particularly at the time when pianists are often expected to take the very opposite path.
Ivo Kahánek

I was fortunate indeed to have been given several opportunities to attend maestro Ivan Moravec’s class and to consult him about certain compositions. His indefatigable work on detail was truly astonishing. I could observe his unceasing comparison of recordings, with the aim to make his next performance even better. His perpetual seeking of the perfect performance! And he required the very same from his students. Thanks to his fastidious work and colossal talent, he conquered concert venues worldwide. Some of his recordings are deservedly deemed to be true benchmarks.
Miroslav Sekera

What is the first thing that crosses my mind when I recall the pianist Ivan Moravec? He was a great professional, entirely dedicated to his mission of presenting the beauty of great composers’ music to audiences all over the world. His style reflected the desire for achieving the perfect performance, for getting as close as possible to the core of the composer’s notion. His recordings of Mozart’s concertos, and pieces by Beethoven and Chopin, have inspired me since my childhood. As a conservatory student, I was immensely honoured to hear him at concerts in Prague, as well as to become a pupil of his. I thus had the chance to view close up Moravec’s style of work, his way of approaching the piano, the piano sound and specific interpretation. I was fascinated by his never-ending desire for refinement. He would focus on the tiniest details of the score, which he explored thoroughly. A considerable role in the preparatory phase of rehearsing music was played by his profound knowledge of the most relevant recordings of the respective pieces. When he found out that, because of a disgruntled neighbour, I faced difficulties with everyday practicing, for some time he lent me his portable mechanical keyboard, which he took everywhere on his travels, using it on board planes and in hotels so that he could retain the maximum playing condition. What a great school of life fraught with the joys and woes of the pianist … Time flies mercilessly, and it beggars belief it has been five years since Ivan Moravec passed away. At the time, the Břevnov church resounded with his mesmerising Schubert, as a symbol of consolation and conciliation. I can still hear it, as a sign that giants do not die.
Jitka Čechová

My personal association with the great Czech pianist Ivan Moravec goes back many years. Sometime in the 1980s. I had heard some beautiful recordings that he made, and in my capacity as one of the directors of the Aldeburgh festival, I invited him there to play a recital. Needless to say, it was enchanting, as was getting to know him and his lovely wife, Zuzana. Thus begun a friendship that lasted until his passing away, and which meant that in addition to seeing him every time I came to Prague, we visited with each other in foreign cities (for example, Berlin and Jerusalem) and I was lucky enough to hear other recitals and also attend fascinating master classes that he gave. Through these many years, even when we couldn't see each other, we also were able to have long conversations (both in person and on the phone) that added a lot to my understanding. I was in admiration of his artistic outlook, of his pianistic knowledge, of his complete honesty and moral integrity. He was somebody I wholeheartedly
looked up to, and only regret that there wasn't more time that we could have together. What struck me about his playing was the range of colours he had at his disposal, the utter naturalness of his phrasing, the unotentatious yet commanding technique, and a deeply human perspective, where artificiality had no place. He and his art will be sorely missed, but we do have some wonderful recordings that he left us which do capture the uniqueness on his spirit, and we do have the memories that will always be a part of us.
Murray Perahia